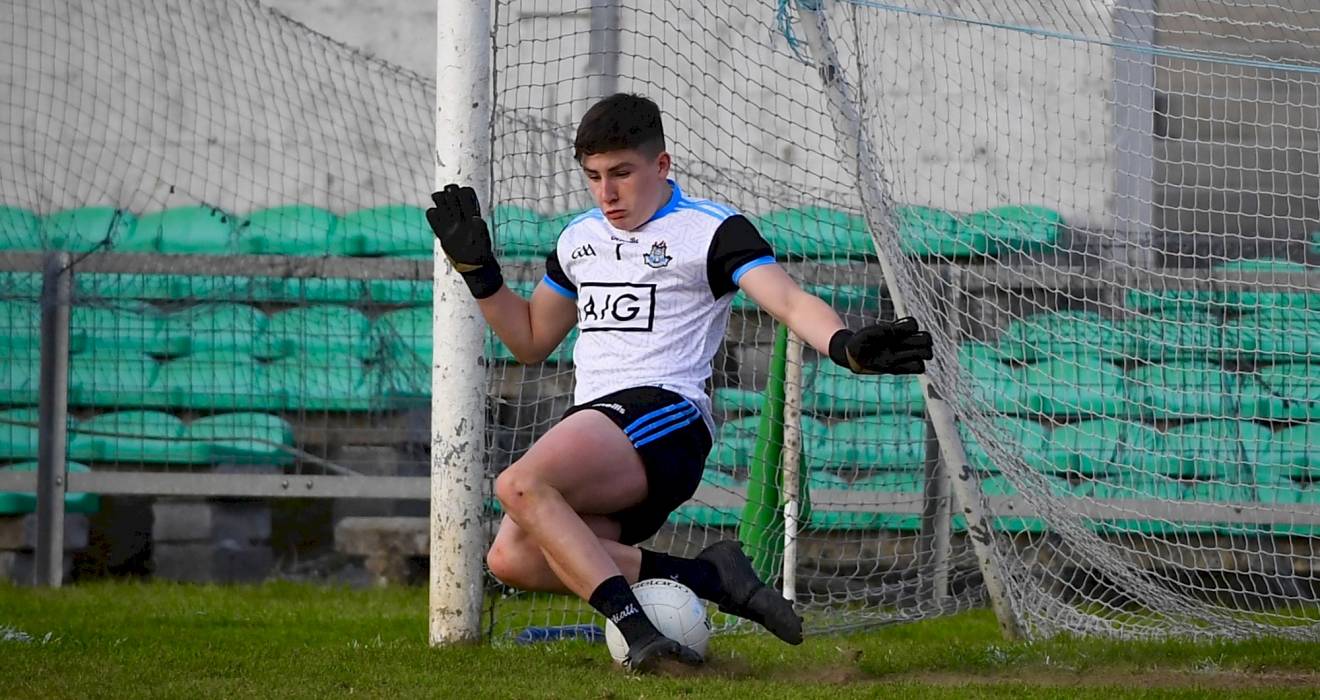 Dublin minor footballers completed their group stage with an 100 per cent record when overcoming a battling Offaly side in Wednesday night's Electric Ireland Leinster MFC Group 2 Round 3 game at O'Connor Park, Tullamore.

The Dubs survived a few scares along the way before emerging deserved victors to make it three wins from three starts in their group and set up a provincial quarter-final against Wicklow on Saturday, June 1.

The Garden County, who defeated Dublin in last year's MFC in Parnell Park, finished runners-up in Group 3 courtesy of their overwhelming 5-18 to 0-10 victory over Louth on Wednesday night.

Dublin played some excellent football in the opening 20 minutes and led 2-5 to 0-2 but were put on the back foot as Offaly then outscored the Dubs 0-6 to 0-1 until the second minute of the second half.

The Faithful County were awarded two penalties in a dramatic flurry of excitement in immediate succession in the 41st minute but the Dubs survived on both occasions to run out six-point victors.

Offaly opened the scoring with a stylish Jay Sheerin point in the opening minute before two points from Luke Swan, who was very influential in the opening half, edged Dublin in front.

The ball-winning prowess and strength in possession of the Castleknock full-forward was to the fore as Dublin settled into their task.

Clinical movement of the ball between Luke Curran and Swan ended with Robbie Bolger running onto a handpass to fist to the net to push Dublin 1-3 to 0-1 clear by the 13th minute.

Offaly replied with a Cormac Delaney point before Sean Kinsella and Swan combined to release David O'Dowd for a point as Dublin began to look slick.

Dublin's second goal came in the 18th minute when Robbie Bolger spotted Fionn Murray in space and he fired to the net past Cathal Ryan to make it 2-4 to 0-2.

Ten minutes before the interval Dublin's lead was extended to 2-5 to 0-2 following a Bolger point but the Dubs played second fiddle for the remainder of the half as Offaly became more adventurous in attack.

Points from Morgan Tynan and Cormac Delaney (two each, one free each) as well as pacey corner-forward Darragh Flynn, who engaged in a great head-to-head battle with Dublin's Conor Tyrell, had the gap closed to 2-6 to 0-7 at the interval.

Nine minutes into the second half Dublin keeper Hugh O'Sullivan showed great reflexes to parry a Tynan effort over the crossbar, it was a portent of things to come.

Two minutes later ref Niall Ward awarded Offaly a penalty taken by Delaney that was saved by Dublin keeper Hugh O'Sullivan with his feet, the Ballyboden St Enda's then scooped the ball off his line but in the goalmouth scrambled that ensued Offaly were awarded a second penalty that was sliced wide by Delaney.

Importantly Dublin secured the next score when sub Callum Monaghan scored the first of his two vital points.

Indeed Dublin got good impact off the bench with sub Ross Keogh also hitting a point before the finish.

Dublin had effectively weathered the Offaly storm with Dubs keeper O'Sulivan being called on once more to deny Flynn, at the expense of a '45', when through on goal in the 57th minute.