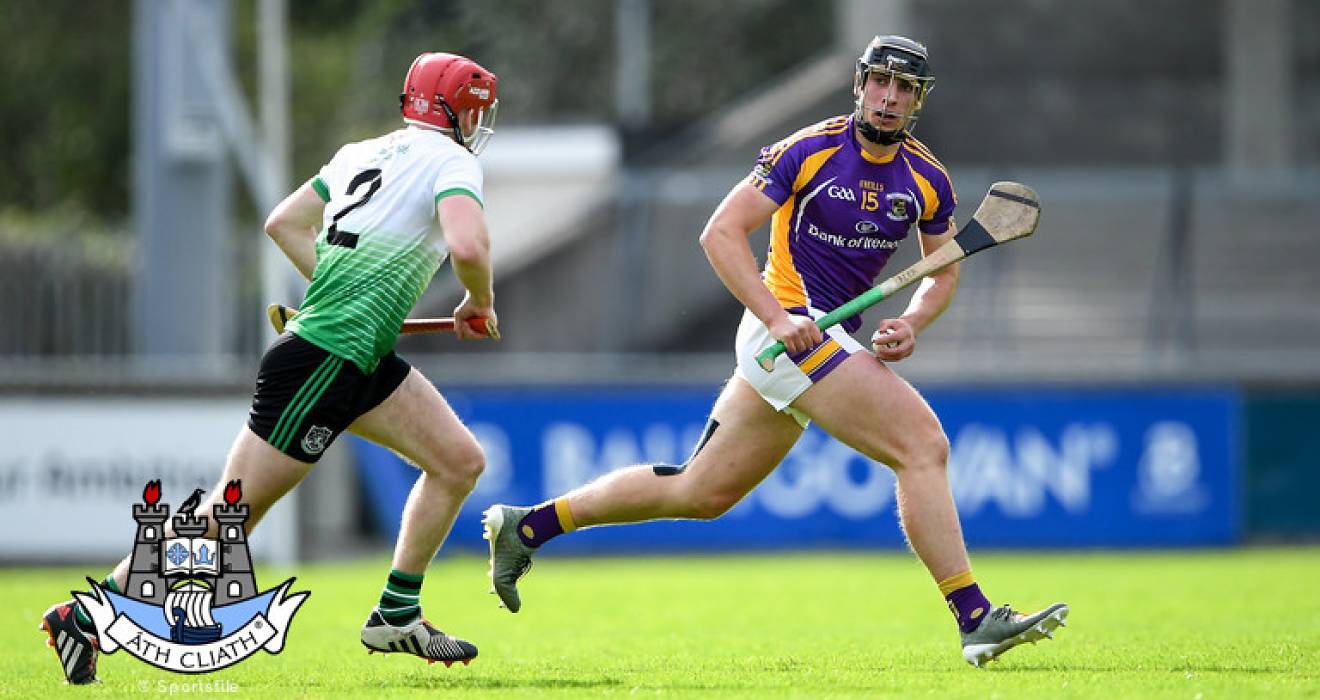 Reigning county champions Cuala will be intent on getting their challenge back on track when they face Thomas Davis this Sunday in their Go-Ahead Dublin SHC 'A' Round 2 Group 3 clash.

Cuala, who were well beaten (3-24 to 0-18) in their first round clash by southside rivals Kilmacud Crokes meet Davis' in O'Toole Park on Sunday afternoon (4.0) - the game forms part of a double-header with the Group 2 meeting of Setanta and St Vincent's (2.0).

Crokes' comprehensive victory over Cuala, who were without a few of their regular starters owing to injury and unavailability, was arguably the best performance of the opening round of games with Ronan Hayes' individual scoring exploits the 'headline grabbing act'.

The Dublin senior hurler scored 3-10 (0-6f) with his first-half hat-trick pushing Crokes 11 points ahead by the half-time interval in a towering display. 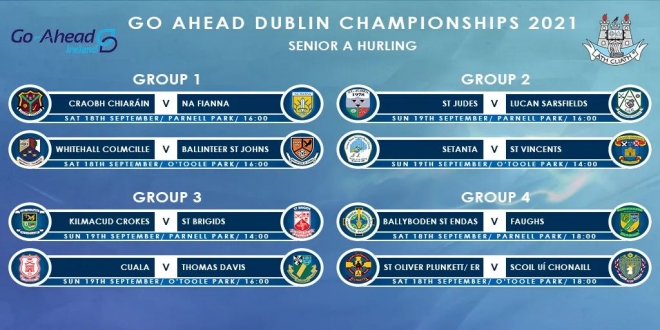 However, the opening quarter was evenly balanced with Ronan Hayes' brilliant ninth minute goal separating the sides at the first water break, 1-6 to 0-6.

The Crokes full-forward drove at the heart of the Cuala defence before lifting the sliotar over Darragh O'Connell and then whipping it to the net past Seán Brennan on the half-volley.

Ronan Hayes added his second goal in the 20th minute before completing his hat-trick in the 26th minute and before the interval he had tallied 3-3 (0-1f) as his side held a commanding 3-14 to 0-12 lead.

Crokes themselves are involved in what could be one of the ties of Round 2 when they face St Brigid's in Parnell Park on Sunday (2.0) in their Group 3 contest. 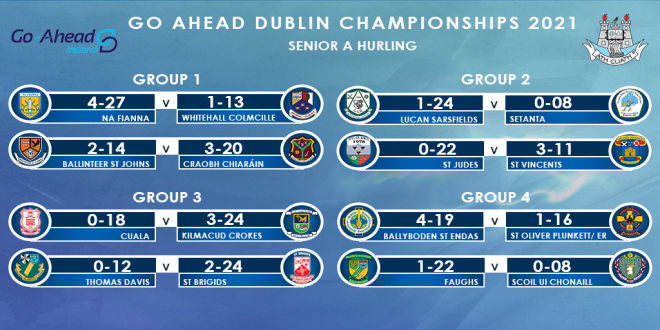 The Russell Park men, who were championship finalists as recently as 2019, were too strong for Thomas Davis last time out and prevailed by 18 points, 2-24 to 0-12.

That clash is part of Sunday's Parnell Park double-header along with the Group 2 meeting of St Jude's and Lucan Sarsfields (4.0).

St Jude's, inspired by Danny Sutcliffe, came with a scoring surge at the finish to defeat St Vincent's 0-22 to 3-11 in their SHC 'A' opener.

A John Hetherton point edged Vincent's ahead with two minutes of normal time to play but the Tymon North men rallied to get the last three scores to secure victory.

Ger McManus, who was influential in the Jude's defence as was Eoin McLoughlin, got their first of this crucial trio of scores with Danny Sutcliffe (free) and sub Manus Malone, following good work by Sutcliffe, saw Jude's seal the deal.

The sides were level six times in the second half including at the three-quarter marker but in the 55th minute a Darach McBride goal, when he whipped on the sliotar to the net, put Vincent's 3-10 to 0-17 ahead.

But Jude's replied with points from Danny Sutcliffe, who scored 0-11 (0-9f) in total, and Diarmuid McLoughlin to bring the sides level just before John Hetherton's point temporarily nosed Vinnies in front. 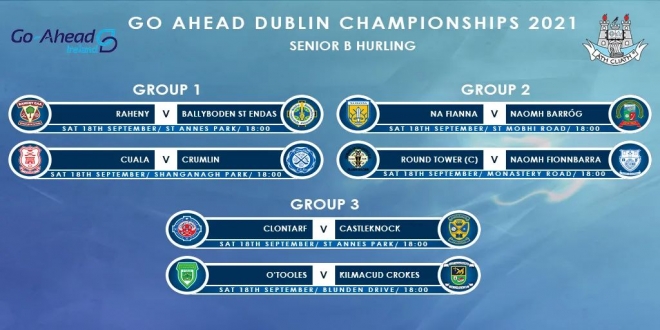 Craobh Chiaráin, who outscored Ballinteer St John's 3-20 to 2-14 last time out, face an in-form Na Fianna on Saturday in Parnell Park in Group 1 (4.0).

The St Mobhi Road outfit, for whom Dublin senior hurler Liam Rushe was making his Na Fianna championship debut, led 1-18 to 0-7 after a commanding opening 30 minutes.

Donal Burke finished with a tally of 1-15 (0-9f, 0-1 65) and his side hit three second half goals with Donal Burke and Seán Baxter on target while late on Seán Burke added their fourth goal in their 23-point victory.

The second game on Saturday at the Donnycarney venue is the Group 4 clash of Ballyboden St Enda's and Faughs.

Faughs defeated Scoil Uí Chonaill 1-22 to 0-8 in their opener with Ciarán Brennan getting their goal late on following great vision by Peter Shaw. 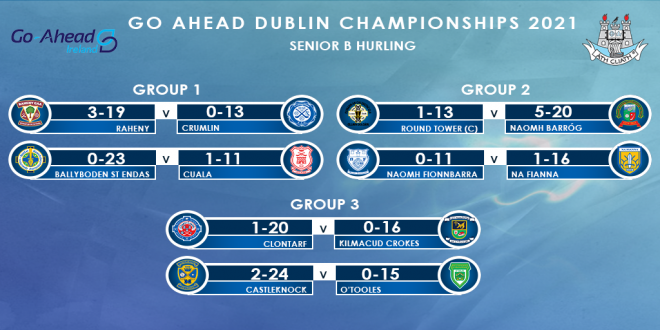 The opening exchanges were very evenly balanced with Scoil leading 0-5 to 0-3 by the 14th minute with Barry Cushen (two frees), Robert Kennedy and Pádraig Kinsella (two points from play) finding their range.

However, as the half progressed Faughs got a stronger foothold in the encounter with Conor O'Shea, Neil Bennett, Carl O'Mahony, James O'Brien (who tallied five points from play overall), Jack McVeigh and David Croke all on target.

Faughs continued to keep the scoreboard ticking over in the second half with O'Brien, Mostyn, O'Mahony, Fergal Heavey and Shaw getting points before Brennan's well-taken goal put the final gloss on the final scoreline.

For their opponents first-half goals from Shane Kennedy and Aidan Mellett put Ballyboden St Enda's on their way to victory over St Oliver Plunkett/Eoghan Ruadh (4-19 to 1-16) in their Round 1 duel.

Shane Kennedy's goal came just before the first water stoppage which pushed his side into a 1-5 to 0-4 lead.

Good anticipation by Boden full-back Luke Corcoran intercepted a long ball down the terrace side and he switched the play crossfield to his keeper Finn McGarry, the netminder's long delivery was brilliantly judged by Niall McMorrow who slipped a pass to his corner-forward team-mate who made no mistake from ten metres.

Ballyboden had opened impressively with the first five points of the contest through Conor Dooley (two, one free), James Roche and two from Niall Ryan. Dooley had also missed a penalty.

However, points from Cillian Hayes (two), Niall Arthur and Jack O'Shea saw Plunkett's reel in their opponents before Kennedy's three-pointer.

Boden held the upperhand in the second quarter and had moved seven points clear before Aidan Mellett showed great pace to score Boden's second goal in the 27th minute. He added a point from halfway immediately after and suddenly the Firhouse Road side were 2-10 to 0-6 clear.

By half-time Malachy Travers' men were 2-13 to 0-8 ahead and at the start of the second period Conor Dooley, who tallied 0-9 (0-8f) overall, converted a free before Pearse Christie hit Boden's third goal following good interplay between James Madden and John Maguire to make it 3-14 to 0-8.

In the 52nd minute Cian Boland scored an excellent individual goal when coming in from the terrace side before firing to the net.

Plunkett's battled back to within seven points (3-17 to 1-16) in the final minutes but Boden added on scores with Simon Lambert, Conor Dooley (two frees), and a Paul Ryan goal - a penalty following a foul on Aidan Mellett - to run out 12-point winners.