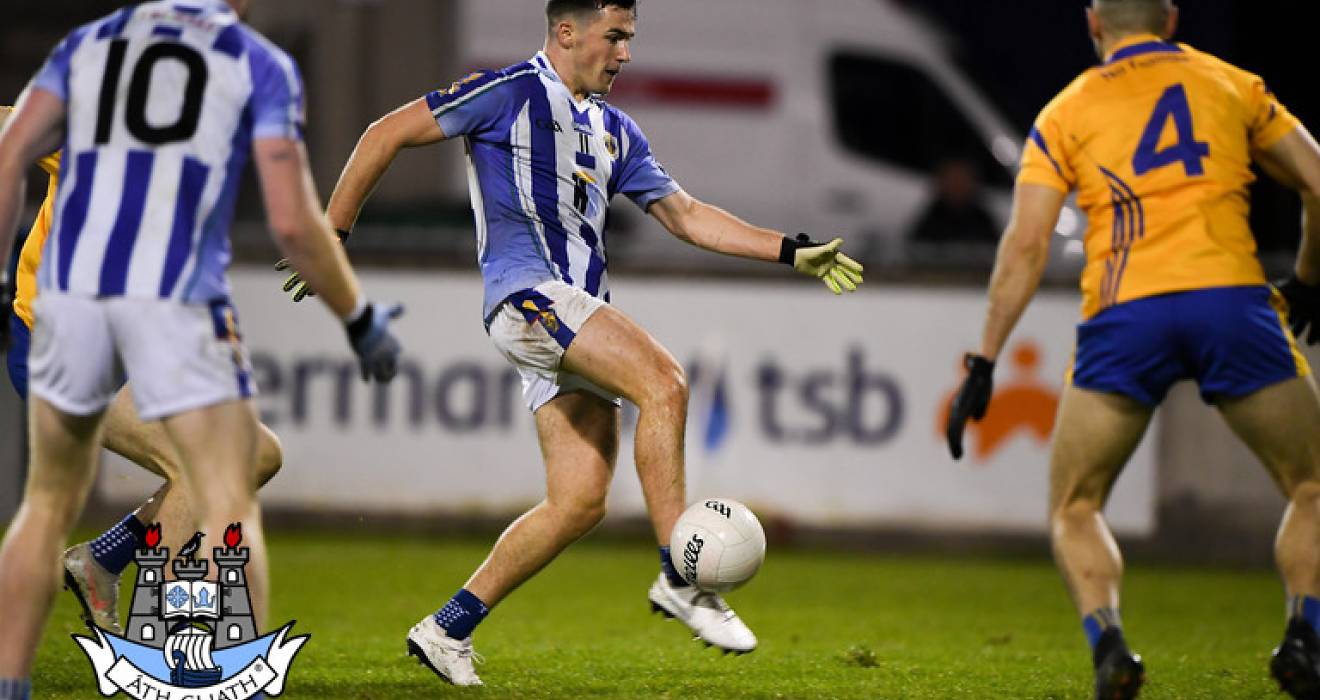 All southside duels in SFC1 semi-finals

This Saturday's Dublin SFC1 semi-finals are an all-southside affair with Parnell Park hosting both games as part of an attractive double-header.

First up is the meeting of Ballyboden St Enda's and St Jude's (5.15) in what some are referring to as 'The Dodder Derby'.

The sides enjoyed contrasting quarter-final victories with Balllyboden St Enda's eventually overcoming Na Fianna, 3-15 to 1-15, after extra-time while St Jude's had a more comfortable journey as they defeated St Vincent's with seven points to spare, 0-11 to 0-4.

Colm Basquel was the hat-trick hero for Boden in their victory over Na Fianna as Anthony Rainbow's men eventually edged out the St Mobhi Road men at Parnell Park.

The talented forward kicked all of Boden's extra-time scores, 2-1 from play, after the southsiders rescued the game in the final moments of normal time to force extra-time.

The first of those crucial goals came in the fifth minute of the second period when he found the corner of David O'Hanlon's net after sub Tom Hayes cleverly batted the ball into his path.

In in the concluding minute of added time Boden broke forward, as Na Fianna chased an equaliser, with James Holland dovetailing with Michael Darragh Macauley before Basquel completed his hat-trick.

It was Basquel's 57th minute goal that helped ensure extra-time before his two goals in the second period of extra-time saw Boden seal the deal.

In the first half of added time Na Fianna looked sure to goal but James Doran’s effort was brilliantly blocked by Dublin senor panelist Robbie McDaid.

In normal time Na Fianna were in the driving seat following Killian Deely’s 52nd minute goal which pushed them 1-13 to 0-12 clear.

The former Dublin U21 drilled to the net following good play between Aaron Byrne and Glen O’Reilly and they looked set to add the scalp to that of Boden having defeated Ballymun Kickhams in their concluding round-robin clash.

However, three minutes from time Colm Basquel fired to the net from close range and then five minutes into added time keeper Darragh Gogan converted a ‘45’ to snatch a draw for Boden from the jaws of defeat.

In the final seconds of the half Conor McHugh was sent off, on second yellow card offence, while Declan O’Mahony, got a yellow.

After an entertaining and very competitive opening 30-plus minutes Na Fianna held a 0-8 to 0-6 lead at half-time of normal time.

The impressive Conor McHugh had accounted for four of those points (including one free) as both forward lines looked dangerous at times. 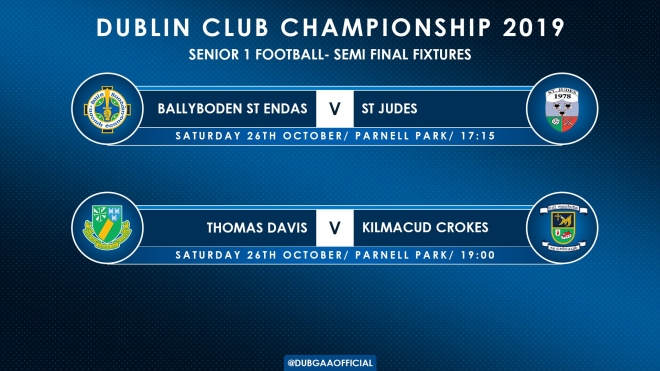 St Jude's, who have never won the Dublin SFC, led St Vincent's by two points at the break before kicking six unanswered points on the restart to wrap up victory in their quarter-final at Parnell Park.

The southsiders were the more cohesive team once they settled and were full value for their victory, their greater intensity and work-rate plus their pressure on the Vincent's kickouts paying dividends.

The Marino men failed to score in the second period until Joe Feeney kicked just their fourth point of the contest in the 59th minute, sub Feeney was dismissed before the finish by ref James King.

Jude’s opening four points of the second period were all frees as Niall Coakley and Pádraic Clarke (three) made it 0-9 to 0-3.

The influential Kevin McManamon then added two scores, the first after great link play and movement, to see Jude’s cruise eight points up, 0-11 to 0-3.

St Jude’s led 0-5 to 0-3 at the break as both sides were guilty of squandering good scoring opportunities.

The Marino side were left to rue two potential goal-scoring situations in the early minutes. 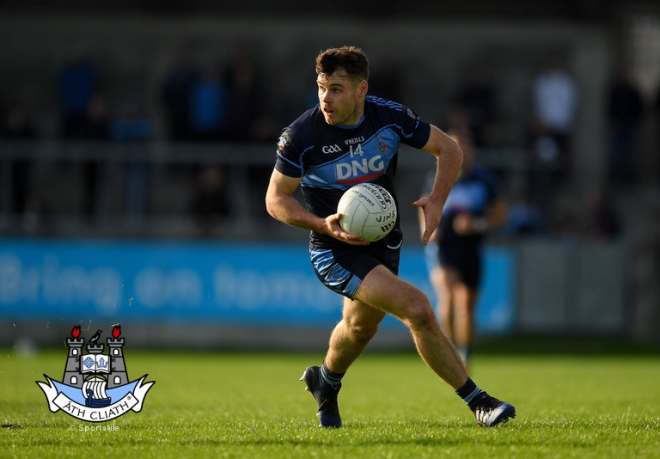 In the second minute a ball across the square from Tomás Quinn was pulled wide on the left by Seán Lowry.

Despite kicking the first two points of the encounter Vincent's failed to score again for almost 20 minutes and missed a second goal opportunity when Jude’s keeper Paul Copeland parried Lowry’s palmed effort, from a Adam Baxter centre, out of a ‘45’.

Thomas Davis caused something of a shock when defeating Castleknock 3-12 to 1-17 in their quarter-final.

Two goals inside a minute during the first half put Paul Kelly's side on the road to victory while their third goal early in the second half ensured their three-pointers were going to prove vital.

Castleknock led 0-5 to 0-4 by the 20th minute before they were rocked by goals from Ryan Deegan and Ciarán Farrelly in immediate succession to suddenly lead 2-4 to 0-5.

From the resulting kickout Thomas Davis won possession and Dublin U20 selector of this year Farrelly held his nerve close to goal to fire to the net.

However, Castleknock replied with a goal of their own from the next attack of significance, culminating in Tommy McDaniel beating keeper Rob Crilly..

The tempo was high and Davis’ defence were tigerish and compact with Adam Fallon and Cian Murphy doing well.

Ger McDermottroe slotted three points for Castleknock before the break (including one free) but scores from Murphy, following good work by the energetic Davy Keogh, Deegan and Farrelly had the Kiltipper Road men 2-7 to 1-8 ahead at the break.

Keogh almost had a superb goal of his own in the 16th minute but his drive cannoned off the crossbar and eventually led to a free that Eoin Kirby converted.

Davis’ made the dream restart to the second half with a Brendan Kirby goal inside the opening minute. 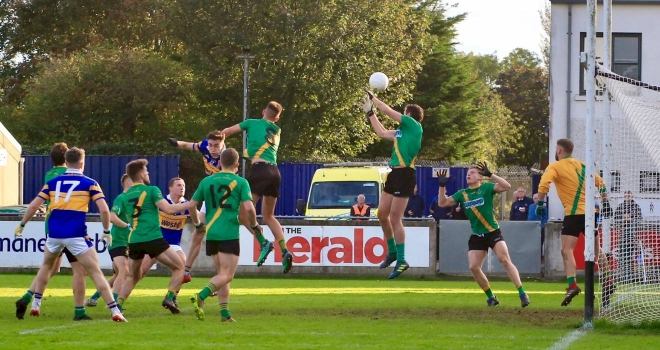 Points from McDermottroe and Rob Shaw cut th gap but the three goals still had Davis’ ahead throughout despite late points from Ciarán Kilkenny and Tom Shields for Castleknock.

Champions of last year, Kilmacud Crokes, improved in the second half of their quarter-final at Parnell Park to topple Clontarf (0-16 to 0-8).

Clontarf led 0-7 to 0-6 at half-time but a combination of the introduction of Paul Mannion by Crokes at half-time and the sending off of Jack McCaffrey four minutes into the second half saw the game turn the way of the Stillorgan men.

Mannion kicked two points with his first two touches in the second half, the first a 50-metre free as Crokes took the lead 0-8 to 0-7 and never trailed again.

McCaffrey’s straight red was followed by eight unanswered points by Crokes with Ross O’Hanlon also making a good save in the 60th minute to deny Darragh Jones a goal.

Pat Burke got two of those points with frees while Shane Cunningham tallied two from play as Crokes played hold-ball for sustained periods at times.

Clontarf’s sole score of the second half arrived three minutes into added time when Kieran McKeown kicked his fourth point of the afternoon.

In the opening half Clontarf were the more composed with points from Ciarán Brennan, Declan Monaghan (‘45’) and Kieran McKeown giving them a 0-3 to 0-0 lead inside nine minutes as Crokes kickout strategy experienced some turbulence.

Tarf had a goal opportunity in the second minute but keeper David Nestor denied McKeown after he had been well placed by Kevin Lillis.

Lillis slotted two first half points for the Dublin 3 side who led 0-7 to 0-5 after 30 minutes but they failed to add another score until McKeown’s injury-time point shortly before the final whistle. 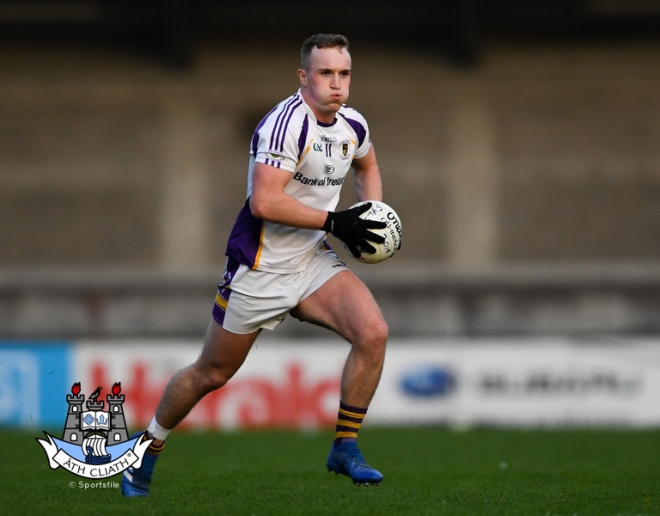