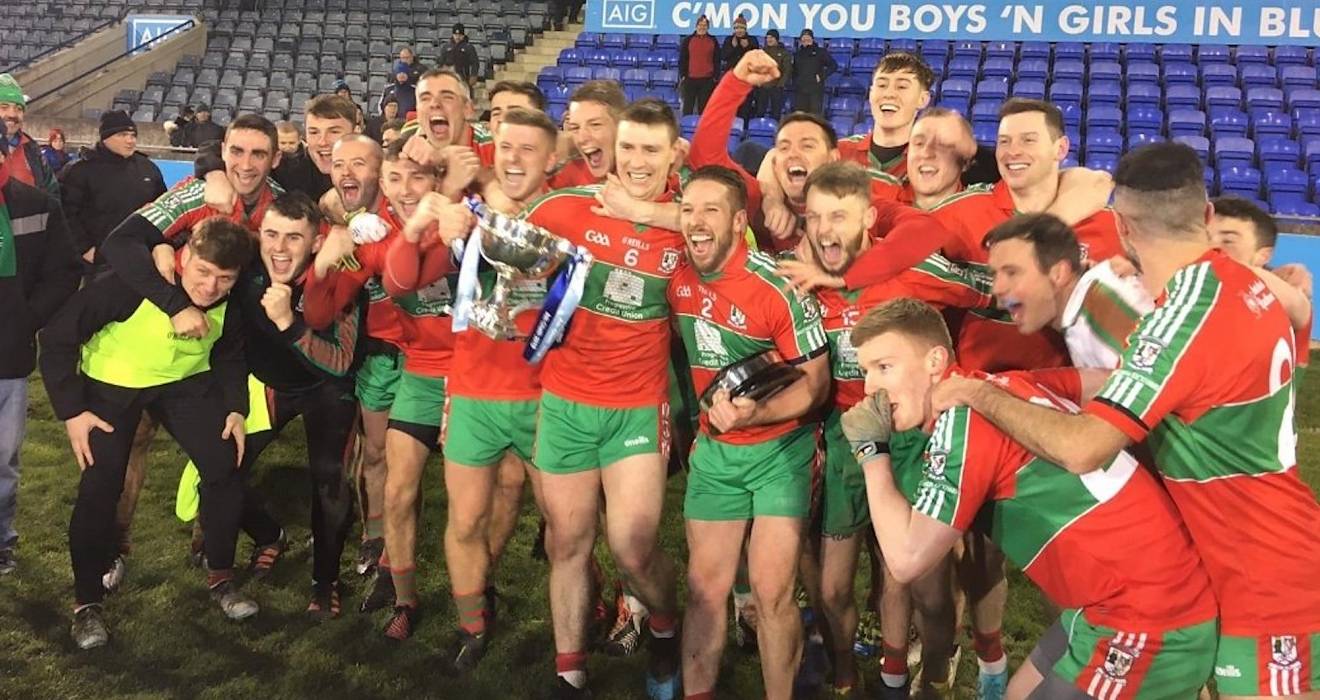 JOHN Small was the hero at Parnell Park on Tuesday night as his point deep into stoppage-time secured the Adult Football League Division One crown for Ballymun Kickhams.

It has been an emotional week for Small and his younger brother Paddy - joint-captains of the side - following the untimely passing of their father Declan, long-time chairman of Kickhams. They were facing a Ballyboden St Enda’s side that were seeking to maintain their unbeaten run through 2019.

Yet, thanks to Small’s dramatic intervention, they couldn’t add to their county and provincial championship successes. When you consider the silverware they have accrued in recent months, it was understandable that ‘Boden were favourites to prevail in this showpiece affair.

Nevertheless, ‘Mun enter this game on the back of an impressive 0-17 to 1-8 victory at the expense of 2018 champions St Vincent’s on November 9. Despite the spectre of an All-Ireland semi-final encounter against Down’s Kilcoo looming large in the new year, ‘Boden manager Anthony Rainbow kept faith with 10 of the team that started the recent Leinster SFC final success over Eire Og.

Although the in-form Colm Basquel had to settle for a spot amongst the substitutes, his brother Ryan and the evergreen Conal Keaney operated in the central attacking positions. While Ballymun held some of their star players in reserve, they had inter-county experience - past and present - on virtually every line of the pitch.

Seven-time Celtic Cross winner James McCarthy lined out alongside Davy Byrne in the ‘Mun midfield and he cancelled out Ryan Basquel's deadlock-breaking free with a sweet effort off his left boot. In the absence of ace marksman Dean Rock, Fiach Andrews was on place-kick duties for Brendan Hackett’s men.

He comfortably converted from close-range to give his side a slender advantage on seven minutes. ‘Boden were turned over in possession on a number of occasions during the early exchanges, but inevitably found their feet as the action wore on in Donnycarney.

After Ross McGarry restored parity to the contest, Warren Egan was on hand to edge them back into the ascendancy. Rival wing-backs Sean Gibbons (‘Boden) and Carl Keeley (‘Mun) proceeded to trade points either side of the first-quarter mark before Dillon Keating bagged a superb equalising score on the left-wing.

The diminutive attacker has been a star performer for Ballymun throughout their top-flight campaign and his outstanding curling strike in the 21st-minute ensured the lead changed hands once more. There was precious little to separate the sides for the majority of the opening period, however, and another Basquel free cancelled out ‘Mun’s slender cushion.

They looked set to remain on level terms at the interval only for Basquel to register his third point of the half at the beginning of injury-time. As a consequence, the southsiders brought a 0-6 to 0-5 buffer into the dressing rooms.

It proved to be a scrappy start to the second period with neither side threatening to cut loose on the opposition goal. Still, the ‘Boden triumvirate of Basquel, Keaney and Tom Hayes shook the woodwork in quick succession while a McCarthy shot was smothered by netminder Darragh Gogan.

It was left for marauding ‘Mun corner-back Alan Hubbard to end a lengthy scoring drought and Andrews - son of former Louth and Cavan boss Val - swiftly followed with a coolly-struck free.

Scoring chances were at a premium but when John Small ventured forward for a 55th-minute point, Ballymun had the finishing line in sight. ‘Boden had to wait until the hour mark for their maiden score of the second half, Tom Hayes converting from close-in to keep their hopes alive.

The tie appeared destined for extra-time when Keaney split the posts under enormous pressure off his ever-dependable left peg. However, Ballymun had other ideas.

Sky Blue favourite Philly McMahon was introduced late on for ‘Mun and executed a terrific turnover to set ‘Mun on the attack. Though they had to be patient in their approach work, a game-clinching opportunity eventually presented itself.

John Small once again found space inside the ‘Boden half and, with all of 64 minutes gone on the clock, he sealed the deal for his side by dissecting the uprights in clinical fashion.

There was jubilant scenes amongst the Ballymun faithful as the Small brothers lifted the trophy in unison and they can now look forward to 2020 with renewed vigour.