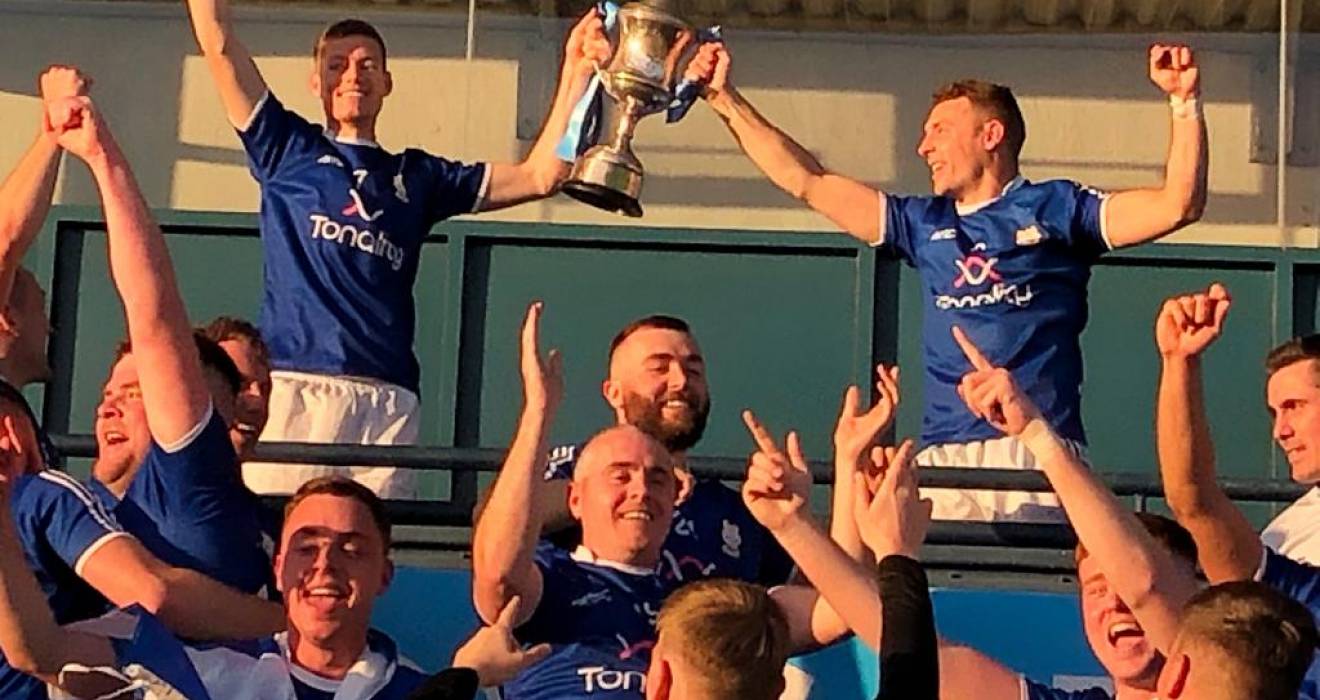 What a week for Naomh Fionnbarra. On Saturday they added the Dublin Intermediate Club FC title to their roll of honour after securing the Dublin SHC ‘B’ the previous Sunday – over 20 players were involved in both panels.

On Saturday a late, late Eamonn Dillon goal snatched victory (3-10 to 2-11) for the Cabra side after an incredible conclusion to their decider against Nh Barróg at Parnell Park.

Dublin hurler Dillon won possession from a Lee Cooney pass about 40 metres out before rounding full-back Mick McCarthy and heading for goal, a point would have brought the game to extra-time, but ‘Trollier’ had other ideas as he stepped inside two retreating defenders before blazing his shot to the roof of Anto Brady’s net to secure the most dramatic of victories and the Barrs first IFC success since 2000.

At the second half water break Fionnbarra led 2-9 to 0-9 with Barróg concluding the scoring at that stage with a fine Dan Higgins point.

After the break Barróg continued to press with Paul Tolan and Luke Nolan kicking scores, the Kilbarrack men then had a Nolan ‘goal’ disallowed for a square ball infringement following good interplay between Seán McHugh and Tolan.

However, two late goals gave Barróg the lead for the first time in this well-contested duel by the second minute of injury-time.

Ciarán Gallagher, with a stunning finish following good work by Conor Gibson and Matthew Owens, got the first of this brace in the 60th minute before Matthew Moffat’s 62nd minute goal propelled his side into a 2-11 to 2-10 lead.

Then with virtually the last real play of the game Barrs snatched victory from the jaws of defeat - Dillon their goal-scoring hero.

In the opening half Fionnbarra led 1-5 to 0-5 at half-time with Wayne Losty’s goal in the third minute, the opening score of the game, the difference between the sides.

Early on the especially the Barrs inside forward line looked very threatening with Karl Grimes and Lee Cooney prominent.

Just after the restart to the second half Conor Gibson kicked his second point of the contest to reduced the gap to two before Barrs struck for their second goal – great combination play from Fer Dodrill and Lee Cooney presenting the opportunity.

They followed that up with a superb individual point from Eamonn Dillon when he travelled half the length of the pitch before firing over to leave two clear goals in it, 2-6 to 0-6.

The Barrs almost added another goal in the 38th minute but Karl Grimes was foiled from close range by keeper Anto Brady.

The freetaking of Paul Tolan kept Barróg in touch but the Cabra side still looked poised for victory as the game entered the last ten minutes and its late drama with Barróg going so close to claiming the honours before Dillon’s terrific late, late winner.

The deadball accuracy of Richie English was central to Jude’s success as he scored 0-9 overall, seven from frees with Seamus Noone prominent at midfield for the winners.

By the break the Tymon North men had established a 0-10 to 0-2 advantage and were well on the road to victory.