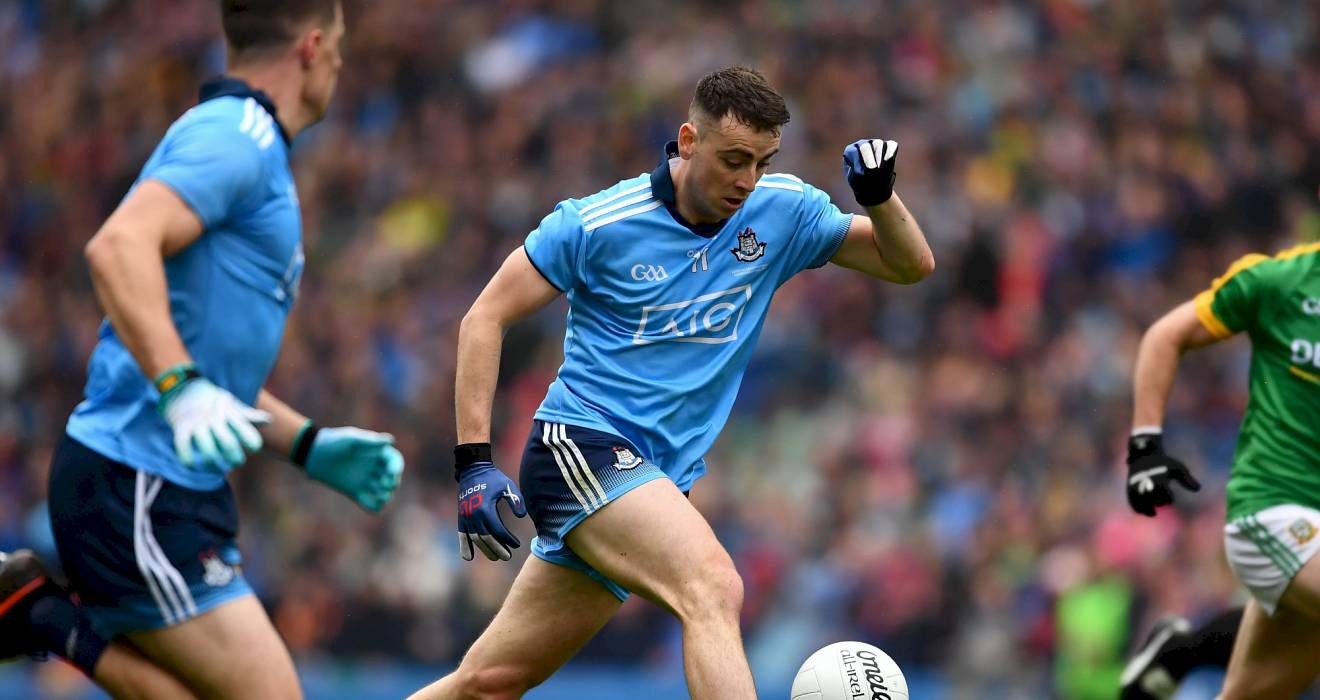 So it's down to the last eight in the race for the Sam Maguire.

Dublin take their place as Leinster champions in Group 2 of the All-Ireland quarter-finals alongside Connacht champions Roscommon, Cork and Tyrone.

It has something of a familiar look to it as Dublin were grouped with both the Rossie and Tyrone last year and emerged alongside Tyrone, who later eventually faced the Dubs in the 2018 All-Ireland SFC decider.

First up it's a resurgent Cork in Croke Park this coming Saturday night (7.0).

While the Dubs are into the last-eight for the 16th consecutive year this is Cork's time at this stage since 2014.

Despite losing this year's Munster final to Kerry the Rebels have impressed this summer and are a team playing with great power, pace, skill and determination.

They recovered from a nightmare start against the Kingdom in the Munster final before losing 1-19 to 3-10.

While one storyline from the Munster final was Kerry securing their 81st provincial title Cork's second half recovery was also headline grabbing.

Cork teams in the recent past might have let their disappointing start get to them but not this year's crop under Ronan McCarthy.

Signs of a new vibrant Cork were emerging and their manager's words after when he stated his side had no interest in 'moral victories' underlined their new ambition.

Cork's forward line has been clicking well in their three games to date against Limerick (Munster semi-final), Kerry (Munster final) and Laois (All-Ireland qualifier round 4).

They have tallied a massive 10-48 in their three games and only conceded 2-40 with Mark Collins, Brian Hurley and the dynamic Ruairi Deane particular prominent to date.

The Castlehaven inside forward duo of Mark Collins and Brian Hurley have great understanding while Ruari Deane has a great array of accurate passes as well as the engine and direct-line running power to unsettle any defence.

However, the injuries keep coming with James McCarthy the latest to be added to a list over the course of this season.

The importance of winning your opening game in the quarter-final group stages can not be over-stated so Dublin will need to hit the ground running against the Rebels this Saturday.

They are the holders and favourites but Cork are coming with serious intent and Dublin must be on their guard.

Here we look at Dublin's opponents for their 'Super 8' group and look at their recent record against Cork, Roscommon and Tyrone.

Dublin showed the mark of champions when they came from eight points in arrears, 2-7 to 1-2 late in the first half, to defeat Cork in this NFL Division 1 clash at Croke Park in front of a crowd of 20,280.

The victory, Dublin's fourth from as many starts that season, pushed them very close already to qualification for the semi-finals as they attempted to win four leagues in-a-row for the first time in Dublin's history.

Jim Gavin's men showed the self-belief and mettle that comes with continuous success as they woke from a sleepy first half display to outplay the Rebels in the second.

Cork led by seven points at the interval after a half during which Dublin failed for the large part to trouble the Cork rearguard who deploy extra defenders down the central spine of their defence.

Diarmuid Connolly's superbly taken goal lifted Dublin's hopes after they had trailed 1-4 to 0-0 inside 20 minutes and by the break Cork led 2-7 to 1-3.

The second half was a different story as the tempo and accuracy of Dublin's play improved by several gears while their give-and-go running game began to play dividends.

The deadball accuracy of Cormac Costello was unerring while the Whitehall Colmcille's man also curled over one beauty off his left foot.

A couple of late frees when the pressure was on put Dublin in front before the hard-working James McCarthy blasted to the net in the fourth minute of injury-time at the end of one of his trademark dynamic runs.

Dublin lost Jonny Cooper to a second yellow card in the 63rd minute but after being knocked back briefly they refocused and drove on to victory.

The Dubs also had one lucky escape at the back when Peter Kelleher's fisted effort under a dropping ball came back off the butt of the upright and was eventually cleared away from danger.

A strong second half saw Dublin come from behind to defeat Roscommon in this well-contested FL Division 1 clash at Dr Hyde Park.

At one stage of the opening half Dublin led by five points following Con O'Callaghan's goal but the sides were level at the break before the home side moved into a two-point lead early in the second period.

However, Dublin then took control of the game and but for some wayward shooting would have prevailed by more in front of a crowd of about 6,500.

The sides were deadlocked 1-9 each at the break but Ros' finished the half on an upward curve and they maintained that momentum into the second half with points from David Murray and Conor Cox to ease clear.

But Roscommon did not score again for 30 minutes as Dublin gained a stranglehold of the game in the middle third to run out deserving five-point victors.

For the Dubs the key score came in the 51st minute when ace poacher Dean Rock swept the ball to the net left-footed in a crowded square as Jim Gavin's men hit 1-5 without reply to set themselves up for victory.

Four points followed - two Rock frees and fine points from play from Niall Scully and Darren Gavin as Dublin cruised to victory with Ros' having Conor Devaney sent off (two yellows) in the 66th minute.

Dublin's opening goal came in the 18th minute when Dean Rock was held up in possession in the Ros' square but managed to offload it into space from where Con O'Callaghan arrived at pace to half-volley the ball to the net.

Dublin led 1-5 to 0-3 at this stage but they failed to kick on and Roscommon came back strong and goaled themselves in the 29th minute when a high delivery from Donie Smith broke for Cathal Cregg who made no mistake.

Paddy Andrews replied for Dublin but it as the home side who finished the half on top with scores from Conor Cox (free), wing-back Ronan Daly and Enda Smith to bring the sides level just before half-time.

“They went ahead by two points in the second half and it was a great test of our character, and the desire of the Dublin players, and I thought they responded to that really well and we finished strongly,” said Dublin manager Jim Gavin.

“We just reset the guys at half-time and not much was said to them. I thought they were trying really hard and I thought collectively there were some great attacks, some great defending and that was consistent throughout the game - no matter who we had on the pitch.”

Despite scoring an early goal when Cormac Costello's pace and finish was showcased in the fourth minute, following great defensive work by Paul Mannion, but Jim Gavin's men played second fiddle for most of the game.

Tyrone also saw the game out in comfortable fashion despite the dismissal of forward Niall Sludden (yellow/black) in the 50th minute.

The Ulster side defended in numbers but broke forward will telling conviction while Cathal McShane and Mattie Donnelly caused problems for Dublin's defence who were left exposed on several occasions.

Dublin might have had a second goal in the opening half but Costello was denied by the influential Niall Morgan in the 28th minute.

Costello's night was over before half-time when he hobbled off injured and he was not the only Dublin player that had to be replaced with injury as John Small and Paddy Andrews added to the number of Dublin troops in casualty.

“That level of performance from the Dublin players certainly is not good enough, at this level you’ll be found out," said Dublin manager Jim Gavin afterwards.

“Our passing was certainly off in many phases of play. Our shot selection was very poor.

“Against a quality side like Tyrone, they are going to punish you at the far end and they got some great scores and, as I said, fully deserved winners.

“We have nine weeks now to run to championship, you take every game on its merits, you want to do well in every game you play in the league because they are quality games.

Tyrone led 1-7 to 1-5 at half-time in front of an attendance of 19,927 - their goal a 21st minute effort from Cathal McShane after David Byrne failed to cut out a long angled low delivery.

The Red Hands were still two points to the good when Sludden was sent off by ref Jerome Henry (Mayo) but Tyrone's response was vital to the victory as they reeled off the next three points through Richie Donnelly, Peter Harte and Cathal McShane (mark).

Dublin lifted themselves for one final surge with the likes of Jonny Cooper lending his services to the attack to some effect.

Ciarán Kilkenny grabbed a point and then had a goal attempt from 14 metres blocked by Ben McDonnell in injury-time.

Paul Mannion fired over a free to leave the gap at three points while Colm Basquel was foiled late on by a Mattie Donnelly block.

To add to Dublin's woes Paddy Andrews, who had been introduced for the injured Cormac Costello, suffered a broken jaw in the second half which required surgery.