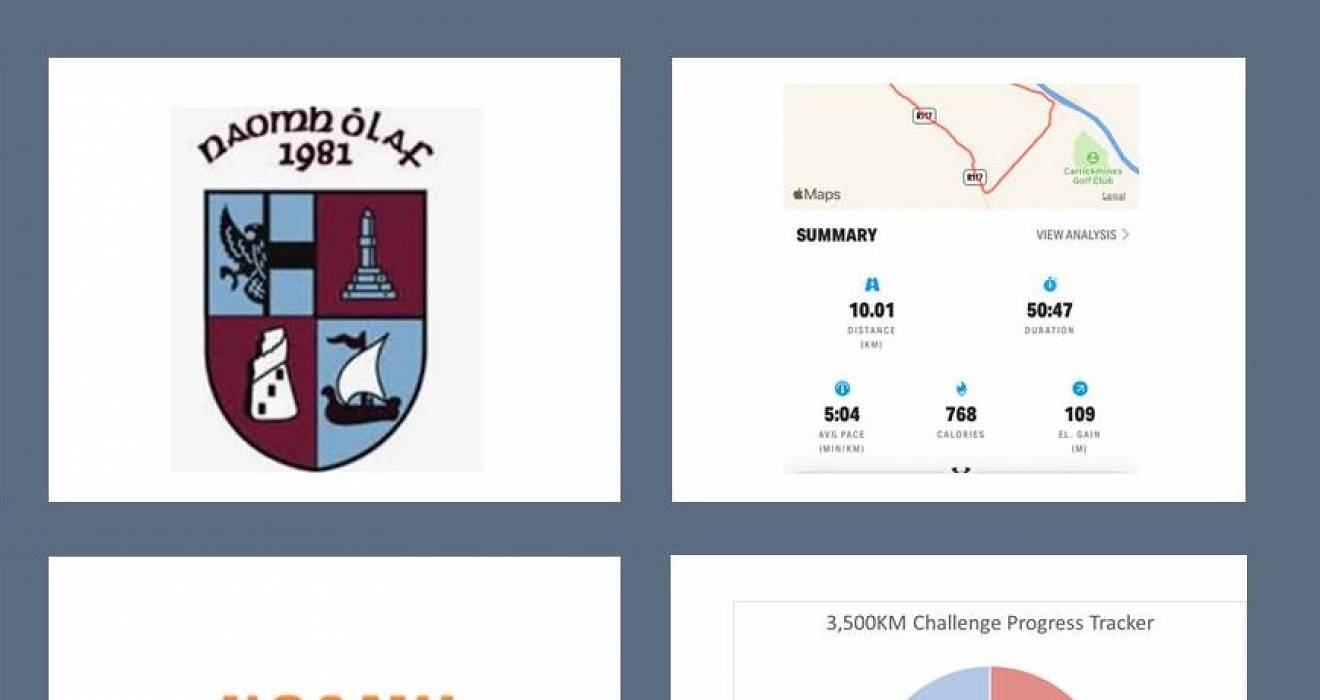 Nh Olaf's senior hurlers and management are involved in a fundraiser for the Jigsaw charity.

Jigsaw is the National Centre for Youth Mental Health.

Olaf's are supporting this charity by, as a group, running 35,00km or 83 marathons throughout the month of June.

"With the challenges of the recent pandemic and the lack of team sports we are coming together to raise money and awareness for this charity. Our ambition is to raise a minimum of €3500 or €1 per km run," reads a statement on the club's facebook.

Already their fundraising endeavours have exceed their target having raised in excess of €6,500.

St Sylvester's recently completed their fundraiser for Pieta which raising a total of €21,564.

Led by clubman, Luke Troy, who was sub goalkeeper on the Dublin 2016 minor team behind current senior panellist Evan Comerford, the Malahide club's 'Run Around The Clock' #Syls4Pieta proved a great success. 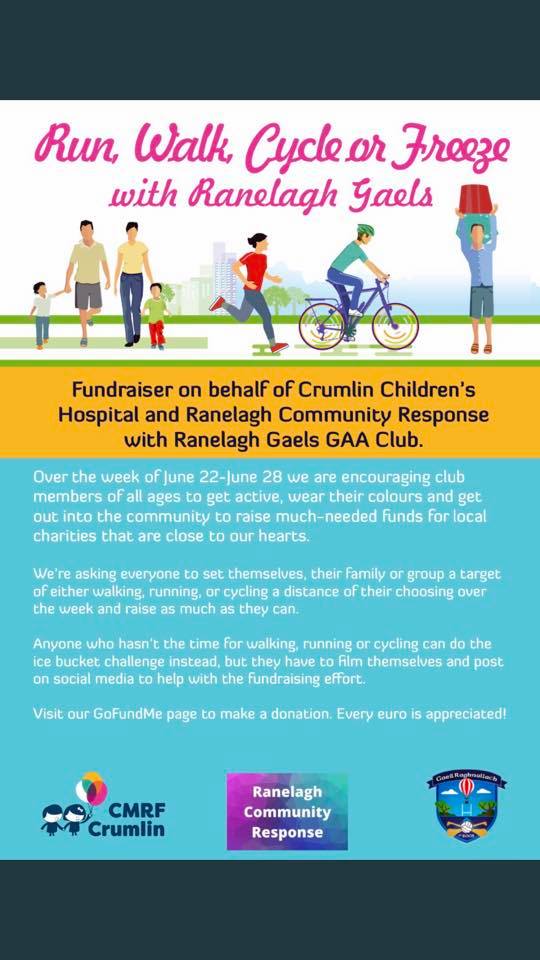 Ranelagh Gaels GAA Club is this week aiming to raise €5,000 for two causes local to their club.

They are asking their club members to Run, Walk, Cycle or Freeze with Ranelagh Gaels in aid of Crumlin Children's Hospital and Ranelagh Community Response during the last full week of the month, June 22-28.

"All you have to do is set yourself a target number of kilometers as an individual, family, or as a group (of friends, coaches, team-mates, etc) to complete during the week and collect as much in donations as you can," reads a statement on their website.

"And if you aren't in a position to do that, you can freeze with the ice bucket challenge - but remember, you have to video it and post it on social media! But make sure that you get plenty of donations before you get doused in freezing water!

"Whatever you are going to do for this charity drive, make sure and post it on social media and challenge people you know to join in - and don't forget to include the Go Fund Me link do donate, which is included below.

"It's important when you are out and about doing the challenge, to wear your Ranelagh Gaels colours to remind people that we're still active in the community even though we have been in lockdown for the past few months," concludes Ranelagh Gaels statement.

You can donate at Go Fund Me page here 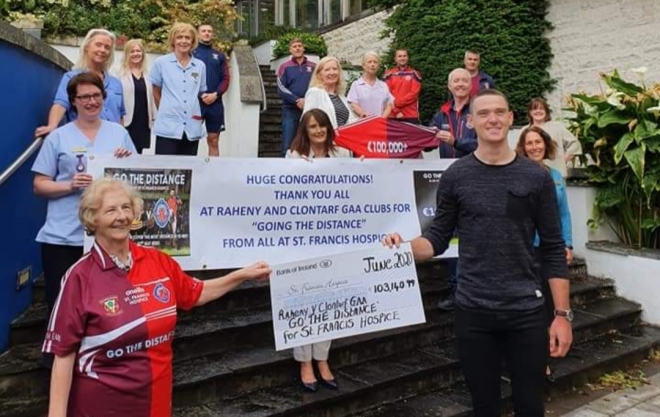 Raheny and Clontarf put local rivalries to one side when they went more than the distance in their derby day duel like no other recently.

In the end the clubs combined to cover over 70,000km in their #GoTheDistance joint fundraiser in aid of St Francis Hospice which raised an incredible €103,104.99.

At the weekend Dublin and Raheny star Brian Fenton met staff of St Francis Hospice to hand over the cheque.

Both clubs asked their members to #GoTheDistance in aid of St Francis Hospice in a 12-hour challenge in St Anne's Park to see which club could walk/run/cycle/rollerblade the greater distance and in a tight finish a few late impact subs saw Raheny win in a photo-finish!

The real winner was the local sense of community and, of course, St Francis Hospice.

Dublin GAA has for many years engaged in fundraisers for St Francis Hospice with collections from match-day programmes as well as an annual coffee morning aiding their great cause. 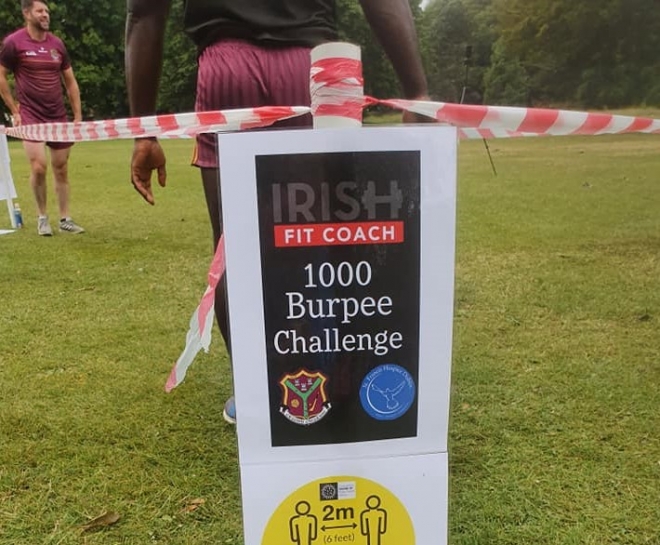 Members of the Craobh Chiaráin senior hurling panel took part in a Burpee Challenge fundraiser in St Anne's Park recently for St Francis Hospice - setting the target of completing 1,000 of the dreaded exercise! 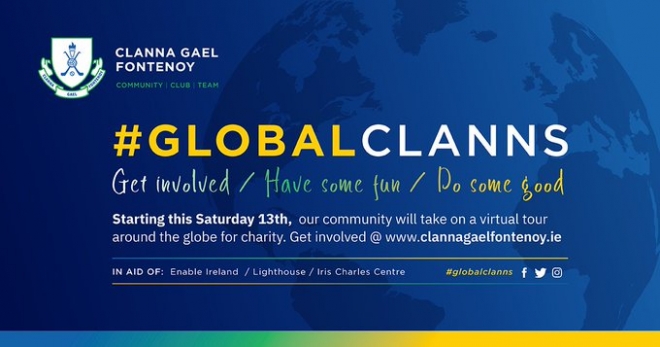 Starting this Saturday (June 13) Clanna Gael Fontenoy have set the target of covering 42,000 kilometres in their around the globe fundraiser for three charities local to their community of Ringsend/Sandymount - Enable Ireland, Lighthouse and Irish Charles Centre. #globalclanns

Former Dublin footballer and selector Declan Darcy, a key man on Jim Gavin's coaching and management ticket, is lending his support to the fundraising drive of his club.

"We really need our community to get involved. It has been an unbelievable challenge the last couple of weeks, one thing that has stood out is the community spirit and now is a time for us, Clanna Gael Fontenoy, to rise to that and shine a light on our community and really get involved in something that is going to be really special and energising as we get back into positivity.

"So get involved, have some fun and make a difference," said Declan in a post on the Clanna Gael Fontenoy social media channel. 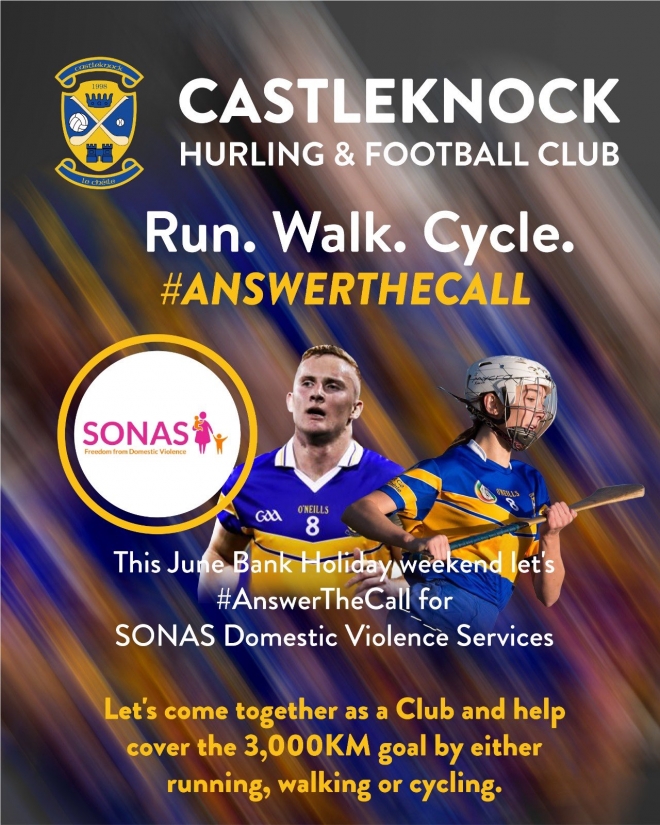 Castleknock GAA club recently marked the 10-year anniversary of SONAS with a show of solidarity and support by walking, running or cycling 3,000km.

The club, both adult and juvenile sections, members and non-members, were invited to assist in completing the 3,000km of activity over the June Bank Holiday weekend.

To participate, all you needed to do is don your club colours and walk, run or cycle any distance you can. Post the distance of your activity to any of the club’s social media channels with the hashtag #AnswerTheCall, and tag the club, or in the case of juveniles, ask your parents do so or inform your mentors.

SONAS, based in Dublin 15, provides services for victims of domestic violence. You can donate to fundraising page at https://www.idonate.ie/fundraiser/11385521_castlek...

On the May Bank Holiday weekend the club's ladies footballers engaged in a highly successful fundraiser for St Francis Hospice (Raheny/Blanchardstown) which yielded over €20,000. 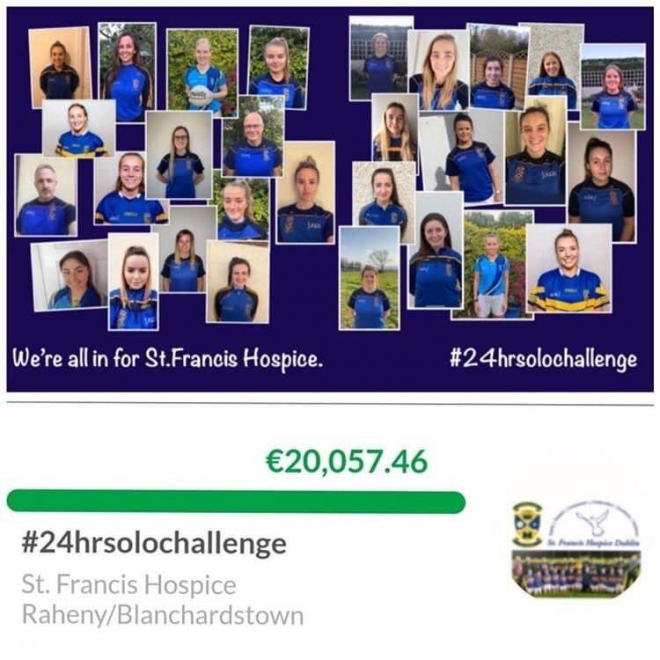 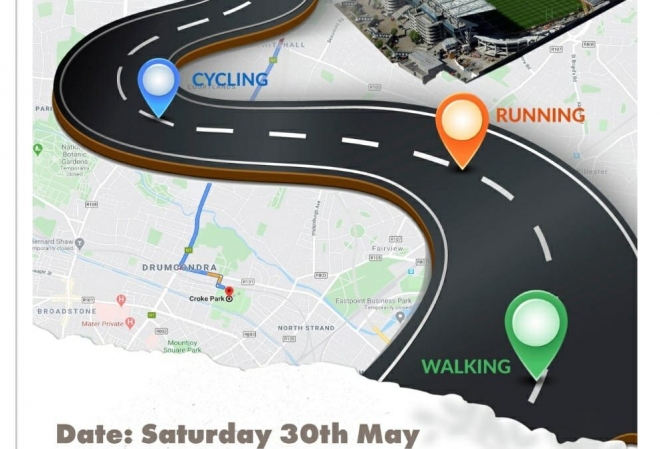 Pieta's  annual fundraiser Darkness into Light was postponed this year due to the Covid-19 pandemic. So this Saturday O'Dwyer's GAA club will attempt to cover the return distance from Balbriggan to Croke Park by individually running/cycling or walking within your own 5km and adhering to social distance guidance at all times. They will begin at 6am Saturday and their event run for 24 hours. 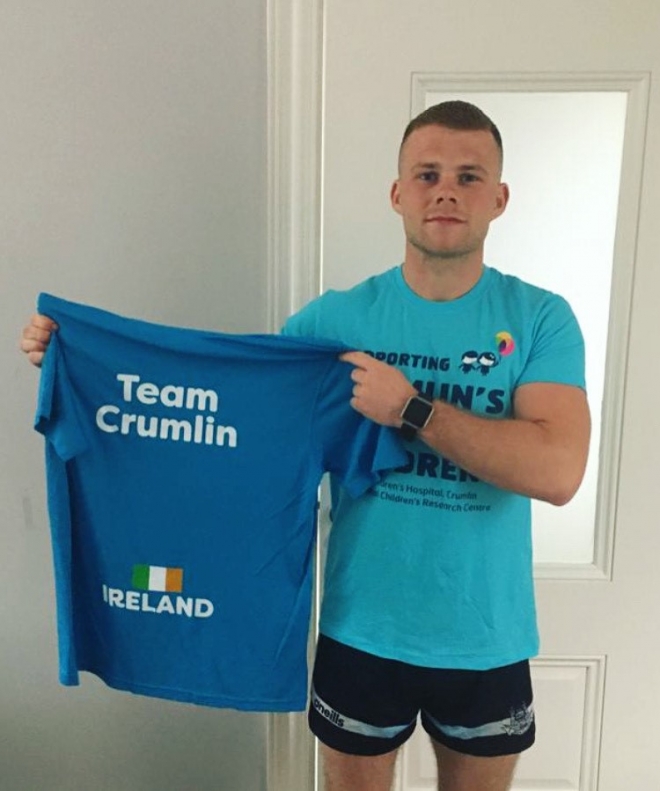 Aaron was a member of the 2017 Dublin All-Ireland winning football panel, under current senior manager Dessie Farrell, having played on county development squads all the way up from under-13 and was a Dublin minor in 2016.

He completed 250km in 20 days for CMRF Crumlin with former Dublin footballer Ciarán Whelan joining him for a few kilometres on the concluding day. Dublin legend Whelan had coached Aaron during his Dublin development squad years and joined in on the last day of the fundraiser.

Last year Aaron helped his club to SFC2 honours when beating Whitehall Colmcille in the final having overcome Cuala after extra-time in their semi-final a week previous.

Aaron enjoyed an eventful day when they saw off the Dalkey men as after helping his side to victory in O'Toole Park he travelled to Castlebar and came on as a second half sub for The Underdogs in their encounter with Mayo in MacHale Park, Castlebar. 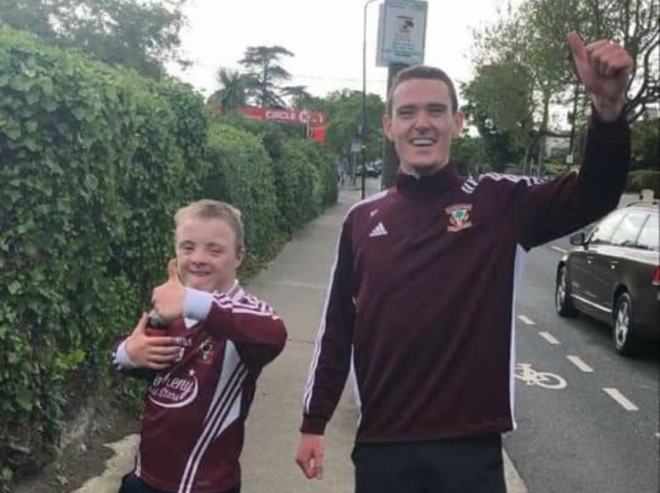 Everybody needs good neighbours! Raheny and Clontarf put any local rivalries to one side when they went more than the distance in their derby day duel like no other last Saturday.

In the end the clubs combined to cover over 70,000km in their #GoTheDistance joint fundraiser in aid of St Francis Hospice which by Tuesday morning had raised an incredible €100,000 and donations were still coming in (open until this coming Saturday).

Both clubs asked their members to #GoTheDistance in aid of St Francis Hospice in a challenge from 8am to 8pm in St Anne's Park to see which club could walk/run/cycle/rollerblade the greater distance and in a tight finish a few late impact subs saw Raheny win in a photo-finish!

The real winner was the local sense of community and, of course, St Francis Hospice.

Dublin GAA has for many years engaged in fundraisers for St Francis Hospice with collections from match-day programmes as well as an annual coffee morning aiding their great cause.

Donations came be made until next Saturday at https://idonate.ie/GoTheDistanceForSFH

This Saturday Dublin LGFA referees group will take part in their charity 5k run with all proceeds going to St Francis Hospice. https://www.gofundme.com/f/dublin-lgfa-refs? 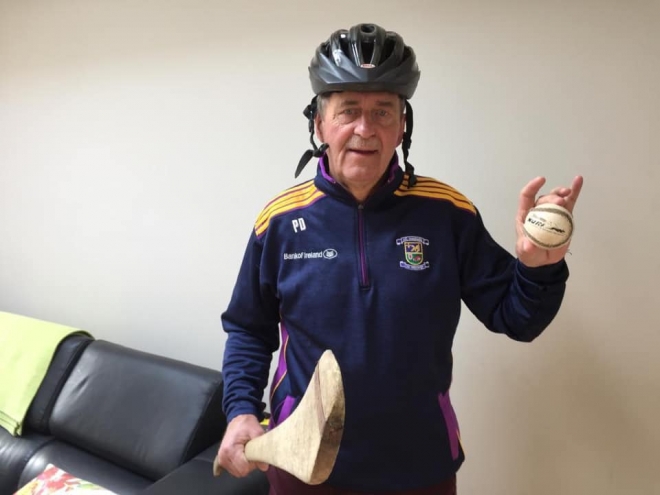 "The donations from the weekend will be split evenly between LauraLynn Ireland’s Children’s Hospice, Pieta House, Preventing Suicide and Self Harm and Breast Cancer Ireland." 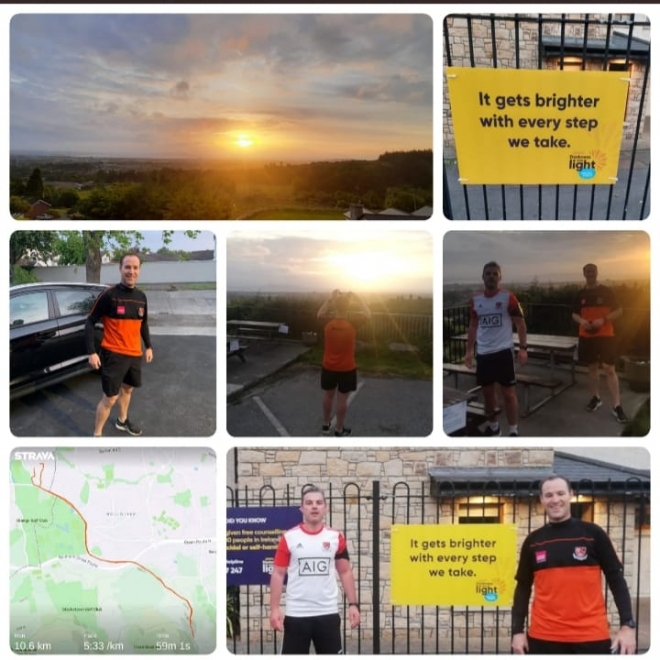 "At the end of an amazing 24-hours for BSJ and Pieta, we have exceeded €50,000 with more donations yet to be accounted for," reported Ballinteer St John's on facebook,

"Incredible fundraising for this great cause. Well done to all our participants (over 1,750 of you) for the running, walking, cycling and of course generosity.

"We will share final figures during the week." https://www.gofundme.com/f/agqwb3-aib-together-fun... 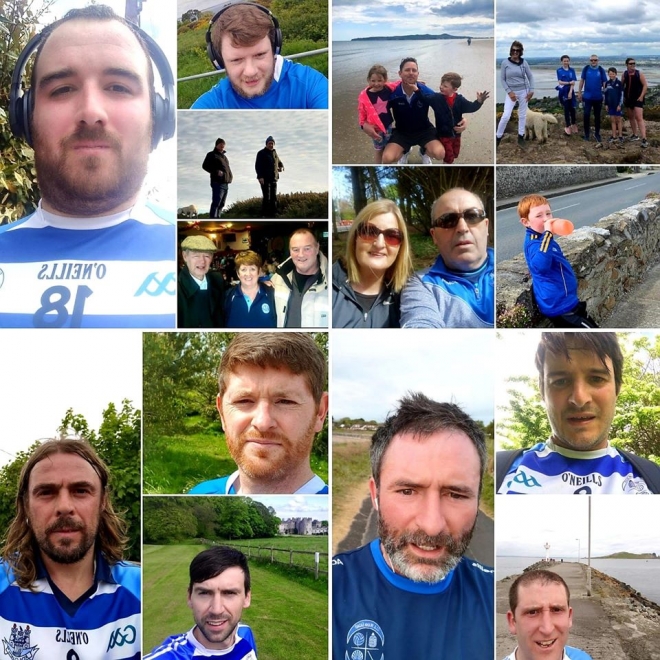 Beann Eadair raised in excess of €20,000 for Jigsaw. Jigsaw is a free and confidential mental health support service for juvenile to youg adults, aged 12-25.

"Our brillo mentors, seeing we were just shy of our final Jigsaw fundraising goal, did a whip around to get us over the big round number of €20,000 (€20,095 to be exact!). Speaks volumes. Phenomenal achievement for our little club. Little but mighty together," stated the Howth club on facebook. 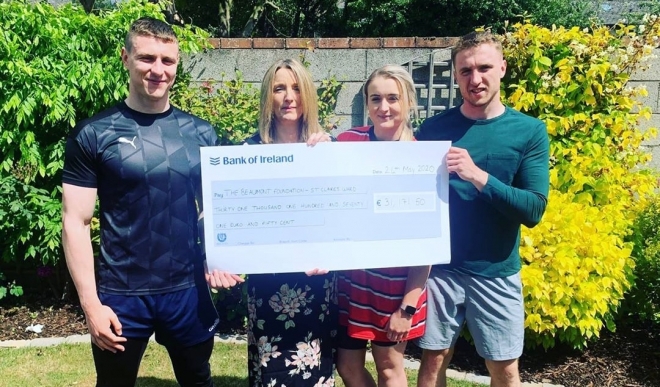 Dublin senior footballers John and Paddy Small took to social media to thank all who contributed recently took part and/or donated in Ballymun Kickhams' sponsored cycle in aid of St Clare's Ward in Beaumont Hospital, in memory of their late father and Kickhams chairman Declan Small.

"Thank you to everyone who contributed to our funds for St Clare's Ward in Beaumont Hospital in memory of our dad, Declan. You are all incredibly generous," wrote elder brother John in his instagram post.

"It shows the esteem our dad was held in. The money will make a real difference to the ward that cared for him. Thanks again. The Small family."

Dublin hurlers from under-14 right through to senior have so far raised over €20,000 for Pieta from the Hurl For Hope fundraiser earlier this month.

Hundreds of hurlers struck 500,000 sliothars at home over an hour on Saturday, May 16.

Watch how they get on here:

Here's how they got on

You can still donate to their fundraiser here.