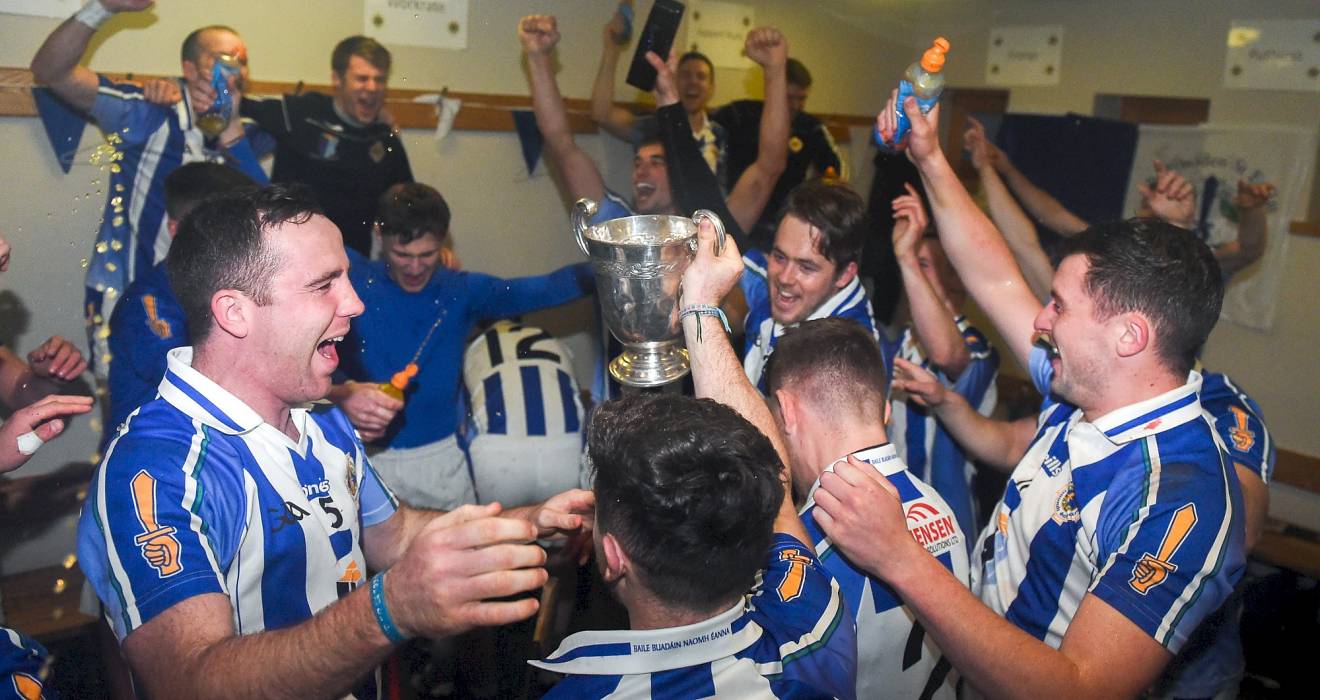 Dublin SHC ‘A’ down to last eight in race for title

It's down to the last eight of the Dublin SHC 'A' following last weekend's concluding round-robin group games.

Joe Fortune's side were 3-16 to 0-2 ahead by the interval with their opening two goals coming in quick succession before the midpoint of the opening half with Paul Doherty and Luke McDwyer on target.

Lucan Sarsfields secured the other quarter-final berth from Group 4 by beating Whitehall Colmcille, 2-20 to 1-15, in their encounter in Parnell Park last Sunday.

Sarsfields gained the upperhand on the restart with points from Ben Coffey (four, two frees) and Paul Crummey extending their lead with Lee Gannon Whitehall's sole scorer in the opening ten minutes of the second half.

As the game moved into added time Donal Flannery grabbed his second goal of the contest to seal the deal for Lucan while Dublin senior Eoghan O'Donnell hit a late consolation goal for Whitehall.

Dublin champions of 2015, 2016 and 2017, Cuala, moved effortlessly into the quarter-finals and finished off their Group 2 round-robin games with a 1-32 to 0-6 victory over Ballinteert St John's in O'Toole Park on Saturday evening.

The only goal of the game came in injury-time when sub Nicky Kenny, who was introduced at half-time, brought his tally to 1-4.

Cuala dominated all over the park with Seán Treacy and Darragh O'Connell giving them a strong midfield platform with O'Connell also scoring four points from play.

The Willie Maher-managed side led 0-15 to 0-4 at half-time with James Gilligan and Aodhán Clabby (three) getting the St John's scores.

Cuala maintained their control in the second period with Colm Cronin impressing for the winners as Ballinteer went 17 minutes on the restart without scoring.

St Brigid's also emerged out of Group 2 courtesy of their 1-30 to 2-12 win against St Jude's in Parnell Park last Saturday evening.

Jude's held a narrow 2-9 to 0-14 interval advantage before a strong second half display saw the Russell Park men gain the upperhand to run out 15-point victors.

Brigid's were rocked by a third minute goal when wing-back Eoin McLoughlin's 50-metre delivery accelerated up off the ground and deceived keeper Alan Nolan.

However, in Eoin Dunne Brigid's had a real leader in their attack and the centre-forward's clever use of possession and accuracy soon had his side in front, 0-7 to 1-2, with wing-back Mark Kavanagh also contributing two fine points.

But Jude's got back in front again in the 17th minute when Diarmuid McLoughlin fired low to the net after good approach play by Fionn O Riain Broin to lead 2-2 to 0-7.

A John Carty point extened Jude's lead before scores from Paul Winters, the influential Daire Plunkett from halfway, and Eoin Dunne edged Brigid's back into the lead, 0-10 to 2-3 with ten minutes remaining in the opening half.

As the game moved into first half added time points from Fionn O Riain Broin (free) and Diarmuid McLoughlin edged Jude's three points up but there was still enough time for Cian O'Sullivan, who scored 0-5 from play overall, and Paul Winters (free) to reduce the margin to the minimum, 2-9 to 0-14, by the break.

Brigid's began the second half with intent and hit six unanswered points inside 12 minutes. Their defence were on top, first to the ball, while Daire Plunkett, Eoin Dunne and Keith Mullally were dictating the tempo around the middle-third.

Brigid's goal arrived 12 minutes from time when the tireless Keith Mullally blasted the sliotar to the net past Stephen Larkin to make it 1-21 to 2-11 and immediately sub Luke Purtill stretched that advantage further with a point.

The Dublin 15 side concluded the game strongly in the last ten minutes with scores from Eoin Dunne, following a clever flick pass from Kevin Callaghan, Daire Plunkett, Kevin Callaghan from halfway, Keith Mullally, a brace of Paul Winters frees, Cian O'Sullivan and fittingly Eoin Dunne to run out commanding winners.

In Group 1 Na FIanna's 5-24 to 0-14 victory over O'Toole's on Saturday in Parnell Park ensured they topped their group ahead of Kilmacud Crokes on scoring difference.

Two first half goals from Colin Currie put Na Fianna on the road to a comfortable victory when the inside forward illustrated a poacher's instinct to grab goals in quick succession in the 18th and 20th minute as his side coasted to a 25-point victory.

Na Fianna were 0-6 to 0-3 to the good when they struck for their first goal.

A long delivery from Peter Feeney was miscontrolled by Larriers keeper Brendan McLoughlin and Currie didn't need a second invitation as he swept the sliotar to the net.

Ninety seconds later Brendan McLoughlin parried a shot from Eoghan McHugh after an incisive first-touch move by Na Fianna and Colin Currie was again in the right place at the right time to push his side 2-6 to 0-3 clear after 20 minutes.

Six minutes into the second half Colin Currie ran onto an angled delivery from Eoghan McHugh before holding up possesion to release raiding wing-back Paul O'Dea who fired to the net to make it 3-13 to 0-10.

Before the finish Seán Currie, younger brother of Colin, and Eoghan McHugh added goals to make sure Na Fianna progressed as winner of their group.

Kilmacud Crokes, who are manged by former Dublin boss Anthony Daly, defeated Faughs 0-24 to 0-13 on Saturday afternoon in O'Toole Park.

Crokes led 0-12 to 0-10 at the interval before six points in-a-row on the restart gave them a winning position when Fergal Whitely, Oisín O'Rorke, Niall Corcoran, Fionn Ó Ceallaigh and Eddie Gibbons were all on target.

St Vincent's over-worked the scoreboard in Parnell Park in their 10-28 to 1-11 victory over Nh Fionnbarra in their Group 3 clash at Parnell Park on Sunday afternoon.

Vincent's had ten different scorers with Cian McBride leading the way with 3-4 from play before being substituted at the midpoint of the second half.

The early signs were ominous for the Barrs and Vincent's stacked up the scores towards the close of the opening half to lead 3-16 to 0-4 at the interval.

Cian McBride got the first of his hat-trick of goals in the second minute when he got a touch to a Conor Burke point effort dropping short.

The Vincent's forward line was combing to telling effect while keeper Dara de Poire gave an exhibition of pucking the sliotar to the advantage of his forwards throughout.

Just before the break Vincent's struck for two goals when Brian Bolger and Cian McBride, with his second, both raised green flags.

Cian McBride's second goal illustrated Vincent's at the best as he fired to the net following great interplay between Tom Connolly, John Hetherton and Riain McBride.

John Hetherton was on target from placed balls and finished the game with a personal tally of 0-11 including five frees and two successfully converted '65s'.

There was scant consolation in this tussle for the Cabra side but Eamonn Dillon did score a superb individual goal before the finish when outpacing several Vincent's defenders and rifling low to the corner of the net in the 55th minute.

But for some fine goalkeeping by Tadhg Stone Vincent's would have scored more than ten goals but still the impressive Chris McGarry and sub Alan Moore both netted two second half goals as the Marino men ran out 44-point winners.

At O'Toole Park on Sunday Craobh Chiaráin, who had already booked their quarter-final spot, defeated St Oliver Plunkett's/Eoghan Ruadh 1-22 to 0-16 to top Group 3 and set up a quarter-final against Lucan Sarsfields.