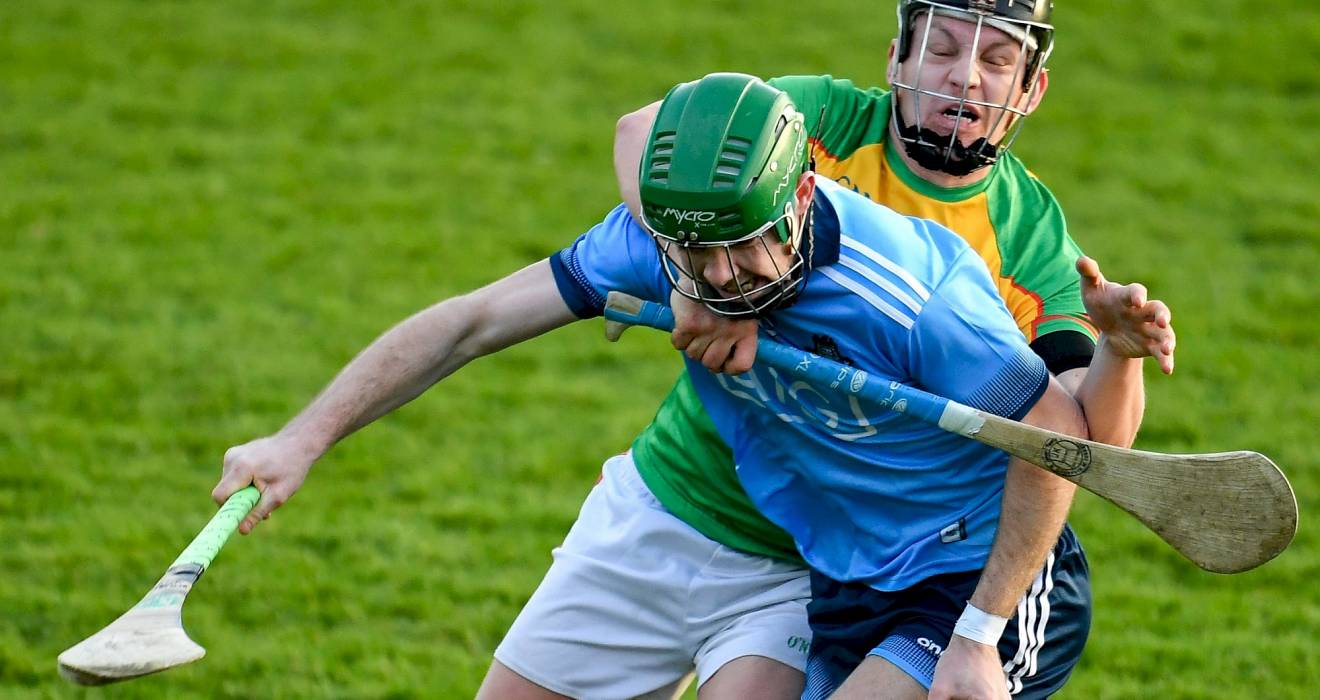 Dublin's hurlers face Carlow in Netwatch Cullen Park this Saturday (5.0) hoping to build on their victory over Laois last time out in the HL Division 1 Group B. Here we look back on Dublin's recent meetings with Saturday's opponents. 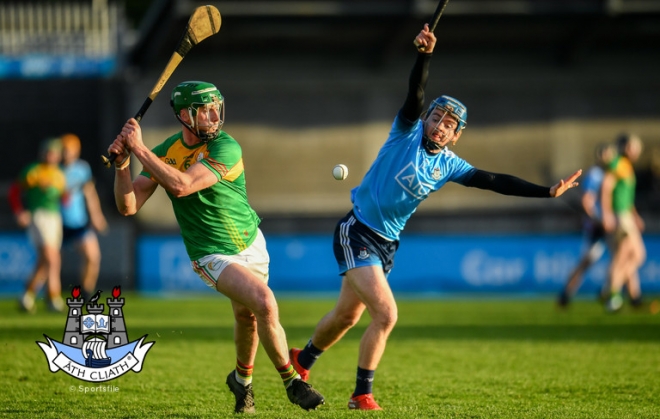 Three first half goals and a scoring surge at the start of the second half saw Dublin to victory in this Walsh Cup clash at Parnell Park.

Dublin led 3-8 to 0-12 at half-time, the goals coming from Eamonn Dillon (two) and Donal Burke, before they hit seven points in-a-row to extend their advantage to 12 points, 3-15 to 0-12, and the outcome was beyond doubt.

Mark Schutte hit two of these points as did Lorcan McMullan and Oisín O’Rorke (one free) with Fergal Whitely converting a long range opportunity to see Dublin out of sight.

Those first half goals gave Dublin a five-point cushion at the breakdespite Carlow hitting eight points in-a-row at one stage of the opening period.

Two of those goals came in immediate succession, both from Eamonn Dillon, to propel Mattie Kenny’s men into a 2-1 to 0-3 lead by the 11th minute.

The Barrowsiders had started the better to lead 0-3 to 0-1 inside five minutes but Dillon’s brace saw the momentum turn temporarily Dublin’s way.

But then Carlow rallied significantly to hit eight points without reply, including four frees and a ‘65’, to make it 2-6 to 0-11 by the 31st minute.

Dublin snapped to life before the interval with a Mark Schutte point before Donal Burke hit Dublin’s third goal, after being placed by the influential Ronan Hayes, and before the break Oisín O’Rorke added a point to make it 3-8 to 0-12. 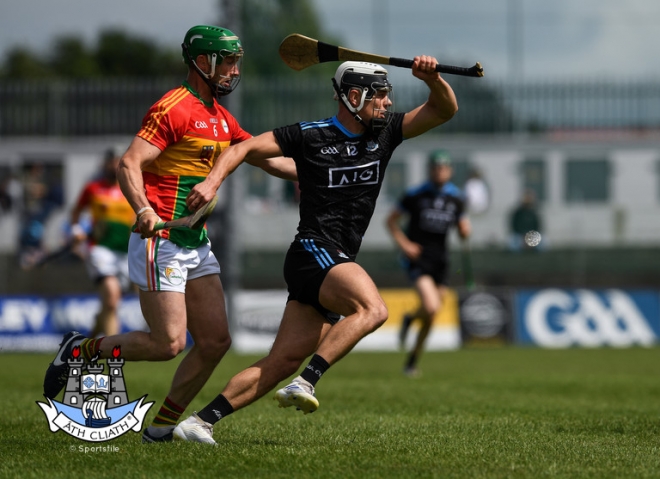 Eamonn Dillon's goals both came in the opening half to help his side to a 2-10 to 0-8 half-time lead in front of an attendance of about 3,500.

The Nh Fionnbarra man struck for his first in the 12th minute following a long delivery into the danger area from Sean Moran to give his side a 1-3 to 0-2 lead.

Six minutes later the Dubs almost got this second goal but Paul Ryan's effort rattled the woodwork after being picked out by Eamonn Dillon.

The second gal arrived in the 29th minute when Ryan and Dillon combined for the Fionnbarra man to rattle the net to push Dublin 2-7 to 0-5 clear.

However, Dublin were reduced to 14 men when Shane Barrett was red-carded by referee John Keenan (Wicklow) following his tackle on Jack Kavanagh.

Points from Marty Kavanagh (free) and Sean Whelan made it 2-9 to 0-8 before Paul Ryan converted his third free of the half, to bring his tally to 0-6.

Dublin restarted the second half well with points from Paul Ryan, after a foul on Conal Keaney, a stylish score from Dillon and then Keaney himself was on target following good work by Cian Hendricken and Chris Crummey for Mattie Kenny's men to lead 2-13 to 0-8.

A Chris Nolan free briefly halted Dublin's momentum but Dublin firing well again soon after with scores from Paul Ryan, a superb Eoghan O'Donnell score and two from Keaney, bringing his tally to 0-4 from play, making it 2-17 to 0-9.

Then the hosts enjoyed their best spell of the contest with James Doyle grabbing a goal in the 44th minute before Chris Nolan tagged on two points. 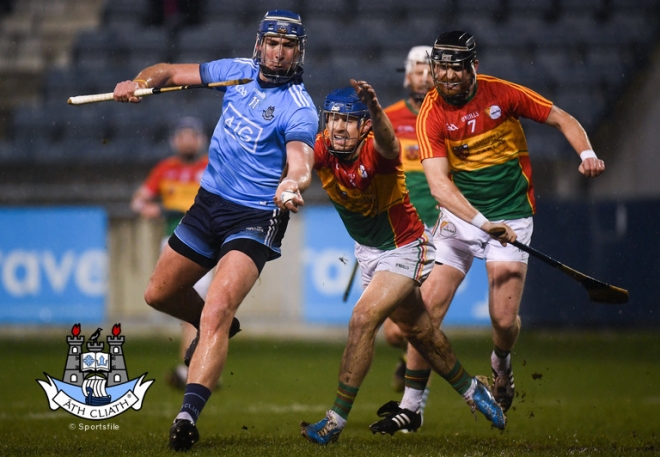 Dublin improved in the second-half to get their NHL1B campaign off to a winning start at Parnell Park in very difficult conditions.

The Dubs trailed by two points at the break, 1-6 to 0-11, but restarted with intent with points from Fiontan McGibb and sub Donal Burke.

Burke's impact on the second-half was telling as he tallied 1-4 from play while fellow sub Danny Sutcliffe also played a leading role in several key scores during the second period.

Eamonn Dillon's goal in the fourth minute of the second-half added to Dublin's momentum and when he pointed in the 43rd minute, after brilliantly controlling the sliotar, Mattie Kenny's side were 2-9 to 0-11 clear.

The Dubs were the stronger team after the change of ends and would have won more comfortably but for the goalkeeping heroics of Carlow's Brian Treacy who produced impressive saves to deny Dillon and McGibb at different stages of the half.

Donal Burke did get Dublin's third goal seven minutes from the end of normal time, following good work by Eamonn Dillon, to move his side 3-14 to 0-18 clear.

Despite making an impressive start Dublin flatlined as the opening half progressed to trail 1-6 to 0-11 at the break.

Early points from Fergal Whitely and Fiontan McGibb had Dublin 0-2 to 0-1 to the good before Darragh O'Connell struck for goal in the third minute following good work by John Hetherton.

Carlow responded with points from Martin Kavanagh (free) and Ted Joyce before Eammon Dillon fired over in the 11th minute for the hosts to lead 1-3 to 0-3.

However, Dublin failed to score again for 14 minutes as Carlow held the upperhand and the freetaking of Martin Kavanagh and scores from play from Seamus Murphy and Ted Joyce had Colm Bonnar's men 0-11 to 1-5 up two minutes into first-half added time.

In the third minute of injury-time a John Hetherton free after a foul on Eamonn Dillon left the Barrowsiders two points to the good at the interval.

“It was a difficult night for hurling," said Dublin manager Mattie Kenny. “Everyone is aware now that for a lot of the guys out there, it was their third game in six days. But in fairness to the guys, they stepped it up in the second half. They put in a very strong second half.

“The substitutes coming off the bench made a big impact too. It’s good to see Danny back in there. And Donal Burke came in – I think Donal shot 1-4, which is a huge contribution for him in the second-half.”