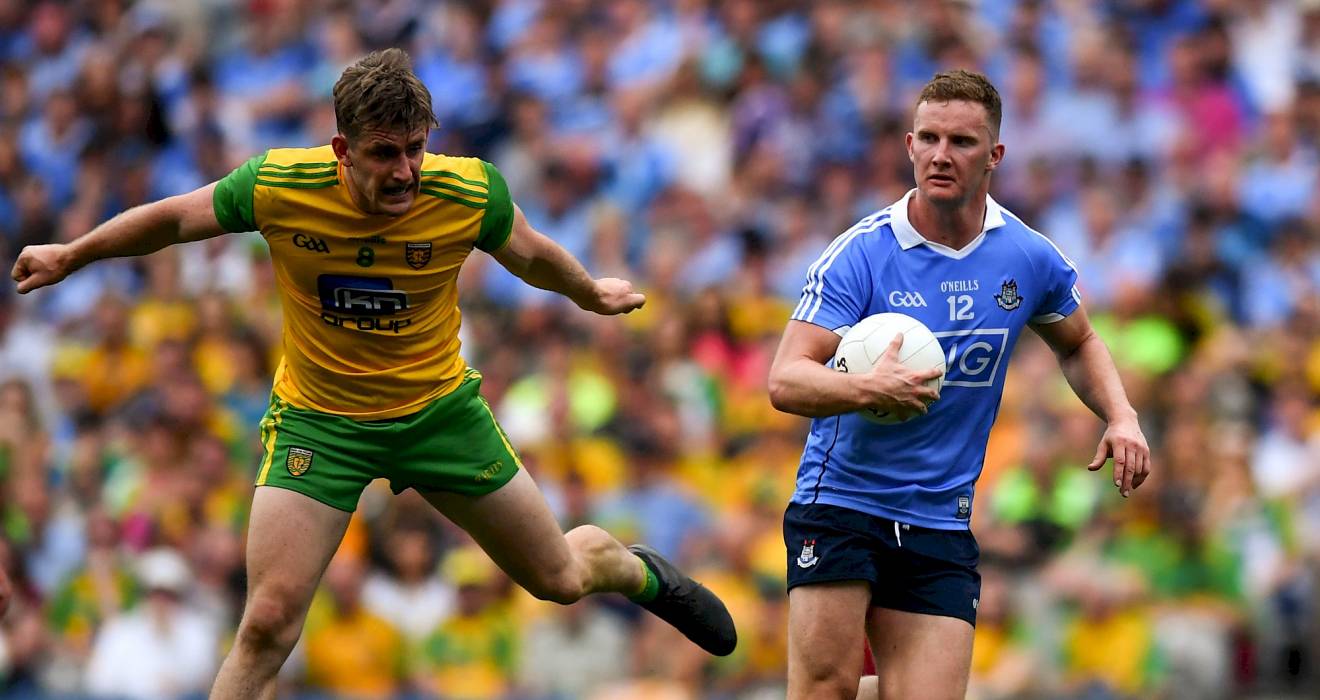 The Dubs and Donegal face each other on Saturday night in FL Division 1 action in Croke Park (7.0) - they did not play against each other in last year’s league or championship. The Ulster side operated in FL Division 2 and were promoted as champions, defeating Meath in the decider. In 2018 the counties clash in both league and championship with the Dubs prevailing by five points on both occasions while in 2017 the sides drew in FL action in Ballybofey. Here we look back on those three encounters.

Dublin got their ‘Super 8’ campaign off to winning start with room for improvement in this All-Ireland SFC quarter-final Group 2 Phase 1 victory at Croke Park.
Goals in either half from Niall Scully, scoring his first championship goals, did the real damage for Dublin but the reigning All-Ireland champions left a lot of scores behind them throughout the game.
A crowd of 53,501 were treated to a mixed bag of a game but there was some excellent scores from both sides while the high fielding of Brian Howard, who won four marks, and Brian Fenton was a feature of the game.
The Dubs did well in the kickout department with the Raheny duo having telling contributions with Howard enjoying a superb game which included two points from play, one off either foot.
“It was a great test. You could see why Donegal are Ulster champions, they are a quality side," said Dublin manager Jim Gavin.
“If they took a few more scoring opportunities it might have been a different game going down the stretch, but we are satisfied and happy we got two points.”
Cormac Costello and Paul Flynn came off the bench to make positive contributions, both getting two points from play.
Dublin opened with two Dean Rock scores (one free, one ‘45’) inside four minutes but trailed by the 11th minute after Donegal’s Jamie Brennan, Frank McGlynn and Ryan McHugh were on target.
The Dubs elected to start Eoin Murchan, making his senior championship starting debut, to track McHugh and the young Na Fianna man did a fine job of curtailing his influence.
Dublin led 1-9 to 0-8 at the break but it should have been more as they squandered several clearcut chances.
The only goal of the opening half came in the 27th minute when Scully cut through the defence before angling back around onto his right foot and slipping the ball to the net for a vital score.
Dublin’s goal remained intact at the other end but there were nervy moments with one last-ditch tackle from Michael Fitzsimons on Jamie Brennan forcing him to skew wide from close range.
Two minutes into the second half Scully found the net again after quick interplay by in Dublin attack mode.
The holders moved eight clear at one stage 2-10 to 0-8 but then missed opportunities with Brian Fenton denied by Shaun Patton while Jack McCaffrey and Con O’Callaghan were also in good positions on other occasions to put Dublin out of sight.
SCORERS - Dublin: D Rock 0-7 (0-5f, 0-1 ‘45’), N Scully 2-0, B Howard, C Costello, P Flynn 0-2 each, C Kilkenny, J McCarthy 0-1 each. Donegal: M Murphy 0-6 (0-3f, 0-1 ‘45’), J Brennan 0-3, R McHugh, M Langan 0-2 each, F McGlynn, C Thompson, E Doherty 0-1 each.
DUBLIN: S Cluxton; E Murchan, M Fitzsimons, J Cooper; J McCarthy, C O'Sullivan, J McCaffrey; B Fenton, MD Macauley; N Scully, C O'Callaghan, B Howard; P Mannion, D Rock, C Kilkenny. Subs: C Costello for Macauley (46), K McManamin for Mannion (48), P Flynn for Howard (54), E Lowndes for McCaffrey (62), C Basquel for O'Callaghan (70).
DONEGAL: S Patton; EB Gallagher, S McMenamin, E Doherty; F McGlynn, P Brennan, P McGrath; H McFadden, M Murphy; L McLoone, R McHugh, C Thompson; M Langan, O MacNiallais, J Brennan. Subs: N McGee for M McGrath (ht), D Ó Baoill for MacNiallais (51), C Mulligan for Thompson (53), C Ward for Doherty (57), A Thompson for P Brennan (62), S McBrearty for J Brennan (66).
REF: C Lane (Cork). 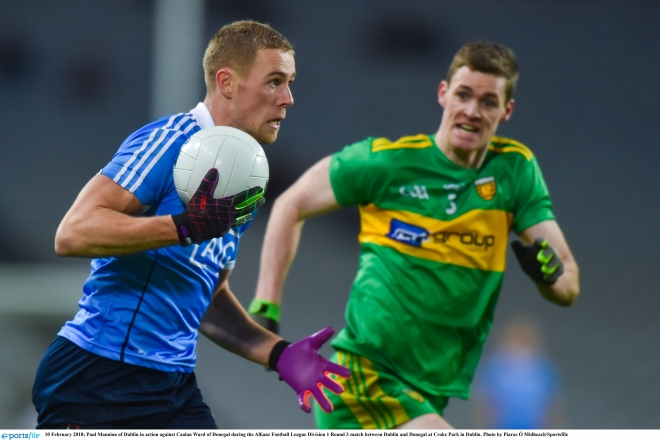 Dublin made it three wins from three starts at the start of their FL campaign but had to show all their big game experience to edge out Donegal at GAA headquarters.
Dublin led 0-11 to 0-5 at half-time after an impressive first half showing and despite extending that advantage they had to hold off a rampant Donegal fightback as the Ulster men twice got to within a point.
It was Dublin, however, who had the final word as they sparked back to life late on to close out the game by kicking the last four points to secure victory with Paul Mannion and three subs - Eoghan O'Gara, Ciarán Reddin and Paddy Small, off his less favoured right foot, all on target.
Donegal carried the fight to Dublin early on to lead 0-2 to 0-1 with their pace and impressive support running an early portent of what was the follow in the second period.
The Jim Gavin's men began to work their way into the contest, which was attended by a crowd of 21,469, with the dynamic Niall Scully kick-starting a run of five unanswered points.
Dublin also had a goal-scoring chance but Colm Basquel's effort cleared the crossbar as the young Ballyboden St Enda's man continues to impress in the early games of his senior career.
Donegal too had a goal opportunity but Jamie Brennan's effort cannoned off of an upright at the Hill 16 end as Dublin took a six-point lead into the break.
Immediately on the restart Brian Fenton strode through the middle of the Donegal defence before clipping a point to push his side seven clear.
But then came the Donegal comeback with the McBrearty brothers, Paddy and Stephen, central to their improvement.
Paddy shot six second half point, four from play, as the Kilcar man led Dublin a merry dance in the second half and soon Donegal were only the minimum in arrears.
But two Colm Basquel points, one a free, steadied the Dubs.
Donegal came with a second surge and at one stage had Dublin pinned into their own half for a long period and but for some superb defending by Jonny Cooper in particular Dublin were in even greater trouble.
However, not for the first time Dublin's subs rose to the occasion with match-winning contributions from O'Gara, Reddin and Paddy Small, younger brother of defender John.
SCORERS - Dublin: N Scully, C Basquel (0-1f) 0-4 each, B Fenton, C Kilkenny, P Mannion (0-1f) 0-2 each, P Andrews, E Lowndes, B Howard, E O'Gara, C Reddin, P Small 0-1 each. Donegal: P McBrearty 0-7 (0-3f), R McHugh, J Brennan, S McBrearty 0-2 each, L McLoone, M McHugh 0-1 each.
DUBLIN: S Cluxton; E Lowndes, P McMahon, D Byrne; J McCarthy, J Cooper, J Small; B Fenton, MD Macauley; N Scully, C Kilkenny, B Howard; P Mannion, P Andrews, C Basquel. Subs: E O'Gara for Andrews (46), C O'Sullivan for McMahon (46), D Rock for Macauley (65), C Reddin for Scully (72), P Small for Basquel (73).
DONEGAL: P Boyle; E Doherty, C Ward, E Gallagher; T McClenaghan, L McLoone, R McHugh; N Mullins, H McFadden; MMcHugh, S McBrearty, C Thompson; P McBrearty, O Mac Niallais, J Brennan. Subs: C McGonigle for Mullins (27), N O'Donnell for Thompson (43), M Murphy for Mac Niallais (55), C McGinley for M McHugh (65), M O'Reilly for S McBrearty (69), P Brennan for R McHugh (72).
REF: J McQuillan (Cavan). 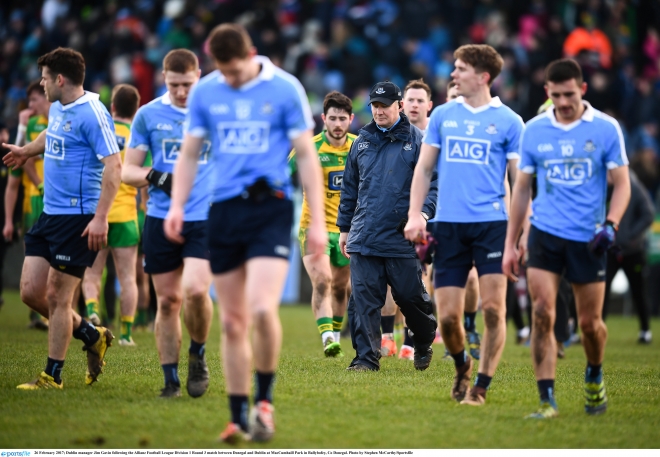 Dublin recovered from the hammerblow of conceding two goals inside a minute late in the first half to draw with Donegal in this FL Division 1 encounter in Ballybofey before an attendance of over 10,000.
The Dubs looked set to edge out their opponents before a soft free in the second minute of added time afforded Michael Murphy the opportunity to level the scoring.
In underfoot conditions that did not lend themselves to great football Donegal opened the scoring inside the first minute when midfielder Jason McGee split the posts.
However, the Ulster side did not score again for over 25 minutes when Ciarán Thompson converted a free after Dublin had scored five unanswered points.
Shane Carthy with the left from near the endline got Dublin going before Dean Rock (free), Ciarán Kilkenny, Conor McHugh and Niall Scully, following good vision by Brian Fenton, propelled their side into a 0-5 to 0-1 lead.
But Donegal concluded the half in amazing fashion with goals form Jason McGee, after Stephen Cluxton could only parry his initial effort, and Ryan McHugh to lead 2-2 to 0-5 at the break.
Four minutes into the second half Michael Murphy put Donegal four clear and Dublin needed to lift their game.
Two Dean Rock frees, following fouls on Jack McCaffrey and then Paul Flynn, cut into the deficit before Dublin put together an incisive hand-passing move that culminated with Niall Scully driving the ball to the net to see his side 1-7 to 2-3 clear.
Dean Rock saw a free come back off the upright in the 59th minute before a fine David Byrne point put Dublin two clear with eight minutes of normal time remaining.
But Donegal rallied back with frees from Thompson and Murphy to earn a share of the spoils.
SCORERS - Donegal: J McGee 1-1, R McHugh 1-0, C Thompson (0-2f), M Murphy (0-2f) 0-2 each. Dublin: N Scully 1-1, D Rock 0-3 (0-3f), S Carthy, C Kilkenny, C McHugh, D Byrne 0-1 each.
DONEGAL: MA McGinley; P McGrath, N McGee, C Ward; R McHugh, P Brennan, E Gallagher; J McGee, M Murphy; F McGlynn, M Carroll, M O'Reilly; C Thompson, E McHugh, J Brennan. Subs: H McFadden for J Brennan (40), D O'Connor for P Brennan (46), E Doherty for Carroll (57), S McBrearty for E McHugh (63),
DUBLIN: S Cluxton; P McMahon, M Fitzsimons, E Lowndes; D Daly, J McCaffrey, J Small; B Fenton, C Reddin; S B Carthy (St Vincent's), C Kilkenny, N Scully; D Rock, E O'Gara, C McHugh. Subs: P Flynn for Carthy (42), MD Macauley for Reddin (42), K McManamon for O'Gara (44), D Byrne for McCaffrey (57), J Whelan for McHugh (62), E Ó Conghaile for Daly (69).
REF: C Branagan (Down).