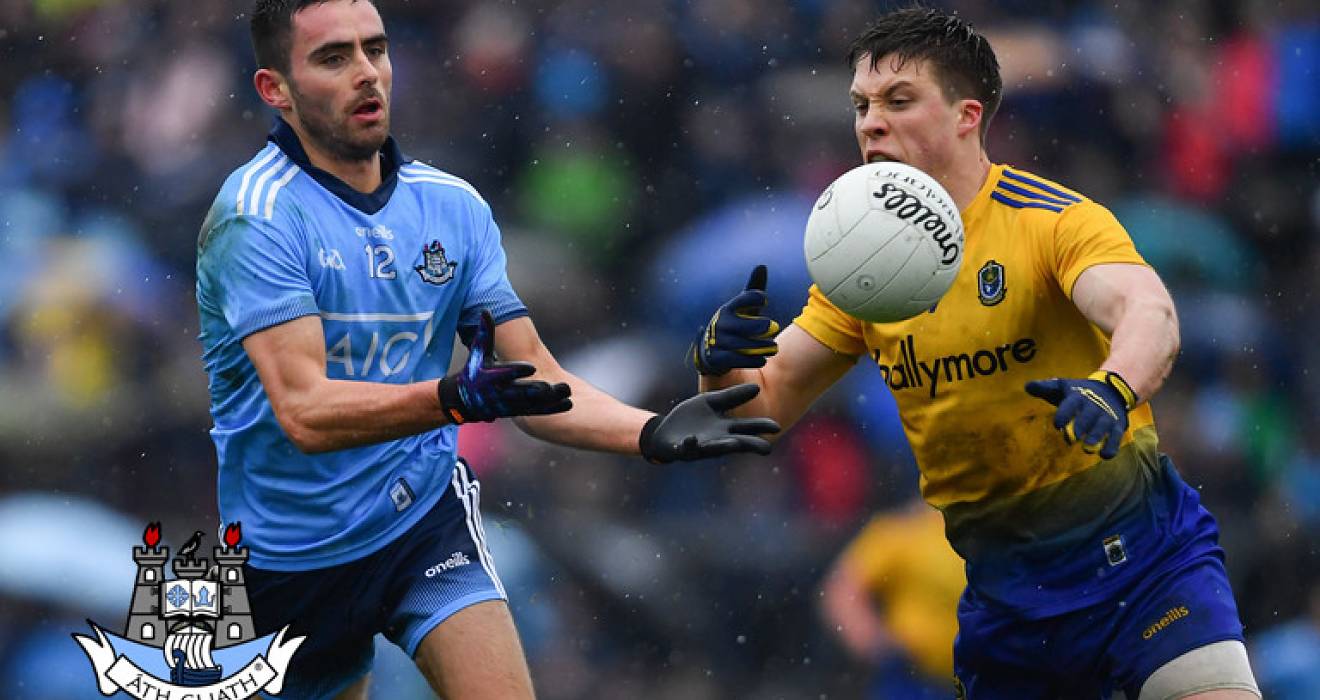 Saturday's clash of Dublin and Roscommon in their All-Ireland SFC quarter-final Group 2 Phase 2 (Croke Park, 7.0; Cork v Tyrone, 5.0) will be the sixth SFC meeting between the counties, with Dublin having won the previous five.

The previous SFC clash to that had been the 2004 All-lreland Qualifier Round 4 when the Dubs prevailed 1-14 to 0-13 in Croke Park.

Last March the counties collided in their FL Division 1 game in Dr Hyde Park, Roscommon with Dublin emerging with the two league points.

Here we look back at Dublin's most recent meetings with Roscommon.

Ticket information for Saturday's double-header in Croke Park is here

A strong second half saw Dublin come from behind to defeat Roscommon in this well-contested FL Division 1 clash at Dr Hyde Park.

At one stage of the opening half Dublin led by five points following Con O'Callaghan's goal but the sides were level at the break before the home side moved into a two-point lead early in the second period.

However, Dublin then took control of the game and but for some wayward shooting would have prevailed by more than five points in front of a crowd of about 6,500.

The sides were deadlocked 1-9 each at the break but Ros' had finished the half on an upward curve and they maintained that into the second half with points from David Murray and Conor Cox to ease clear.

But Roscommon did not score again for 30 minutes as Dublin gained a stranglehold in the middle third to run out deserving five-point victors.

For the Dubs the key score came in the 51st minute when ace poacher Dean Rock swept the ball to the net left-footed in a crowded square as Jim Gavin's men hit 1-5 without reply to set themselves up for victory.

Four points followed - two Rock frees and fine points from play from Niall Scully and Darren Gavin - as Dublin cruised to victory with Ros' having Conor Devaney sent off (two yellows) in the 66th minute.

Dublin's opening goal came in the 18th minute when Dean Rock was held up in possession in the Ros' square but managed to offload it into space from where Con O'Callaghan arrived at pace to half-volley the ball to the net.

Dublin led 1-5 to 0-3 at this stage but they failed to kick on and Roscommon came back strong and goaled themselves in the 29th minute when a high delivery from Donie Smith broke for CathalCregg who made no mistake.

Paddy Andrews replied for Dublin but it was the home side who finished the half on top with scores from Conor Cox (free), wing-back Ronan Daly and Enda Smith to bring the sides level just before half-time.

“They went ahead by two points in the second half and it was a great test of our character, and the desire of the Dublin players, and I thought they responded to that really well and we finished strongly,” said Dublin manager Jim Gavin.

“We just reset the guys at half-time and not much was said to them. I thought they were trying really hard and I thought collectively there were some great attacks, some great defending and that was consistent throughout the game - no matter who we had on the pitch.” 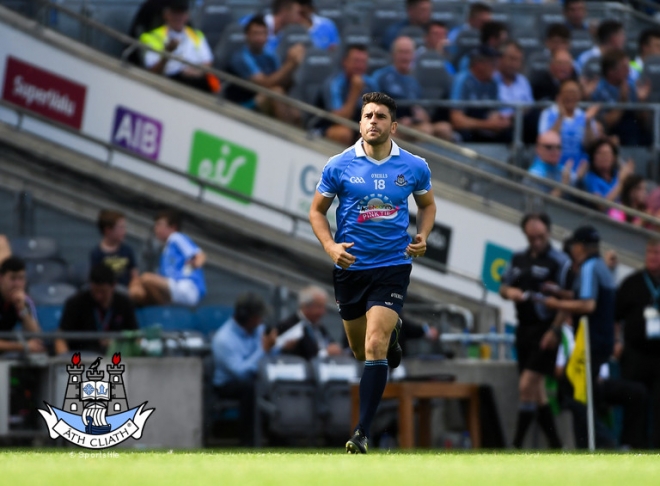 Dublin warmed up for the following Saturday's All-Ireland SFC semi-final against Galway with a comfortable 14-point quarter-final Group 2 Phase 3 over Roscommon in Croke Park.

A crowd of 33,240 attended the double-header which included Kildare being crowned inaugural All-Ireland U20FC champions following their victory over Mayo.

Manager Jim Gavin altered his line-up from the starting 15 that faced Tyrone last time out and the likes of Cormac Costello, Paul Flynn and Eoghan O'Gara grabbed the opportunity with both hands.

Bernard Brogan also made his competitive return from his cruciate knee injury, coming on as a blood sub for Mark Schutte for six minutes late in the second half.

Costello was direct and skillful in attack and finished with nine points to his name which included what looked certain to be a goal in first-half added time but with the goal at his mercy the Whitehall Colmcille man blazed over.

O'Gara was a powerful ball-winning presence close to the Roscommon goal and hit two second half goals in this free-scoring tussle.

Paul Flynn finished brilliantly to the Roscommon net in the 21st minute from 20 metres and ten minutes later Michael Darragh Macauley powered past two defenders before picking his spot low to the corner.

Roscommon restarted with greater intent and were rewarded with a Gary Patterson goal, that deflected to the net off Conor Mullally, but Dublin quickly regained control with O'Gara's first goal in the 41st minute.

His second in the 51st minute was also a brilliantly struck shot to see Dublin move 4-18 to 1-8 clear.

Roscommon finished the game the stronger with Dublin minds already moving to the following weekend. 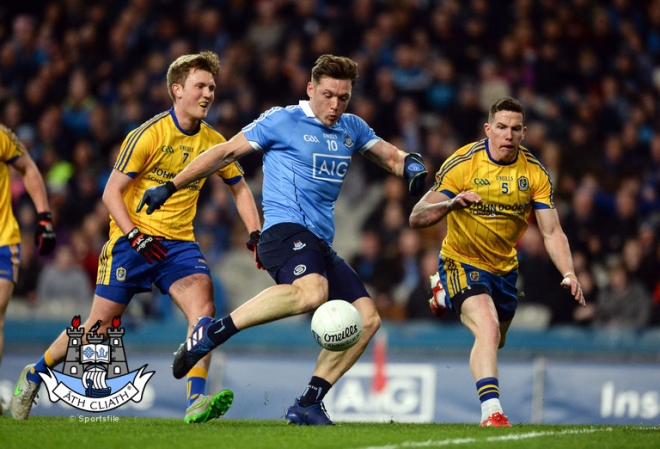 The two league points coupled with the margin strengthens Dublin's position at the top of the table but with no semi-finals this year they travel to Monaghan next Sunday in the last round of regulation with it all still to play for at the business end.

The win also cements this team's place in the history books as they made it a record 35 games unbeaten in league and championship dating back to the league defeat to Kerry on March 1, 2015.

The Dubs played some majestic football at times as their movement, timing and accuracy caused major problems for the Roscommon defence.

Paul Flynn, making his first start of the season was the star of the show kicking 1-6, all from play, in an all-action display while Bernard Brogan, also starting for the first time in 2017, showed brilliantly for the ball all night as well as scoring 0-3 from play and laying on the pass for Flynn's first half goal.

The first goal arrived in the 15th minute when Brogan brilliantly fielded a long delivery before off-loading to the in-rushing Flynn who powered to the roof of the net.

Jim Gavin's men were out of sight really by the interval as they had opened up a 1-14 to 0-6 lead.

The scores were coming from all ranges and angles while in defence the Rossies could never raise a sustained effort to put Dublin on the back foot when they did threaten on a few occasions Stephen Cluxton stood strong to deny the impressive Enda Smith of a goal in the first half.

Dublin had 13 different scorers over the 70-plus minutes with the entire starting attack, midfielders Brian Fenton and Ciaran Reddin as well as dynamic defender Eric Lowndes all getting on the scoreboard while subs Conor McHugh, Shane B Carthy, Jack McCaffrey and Diarmuid Connolly also raised white flags.

The one down note on the night was the sight of Connolly limping off before the finish after tweaking his groin.

Dublin's second goal came in the 58th minute when Kevin McManamon picked up possession on the 20-metre line near the Cusack Stand side and carved his way past three defenders before unleashing a venomous shot past keeper Darren O'Malley - vintage McManamon.