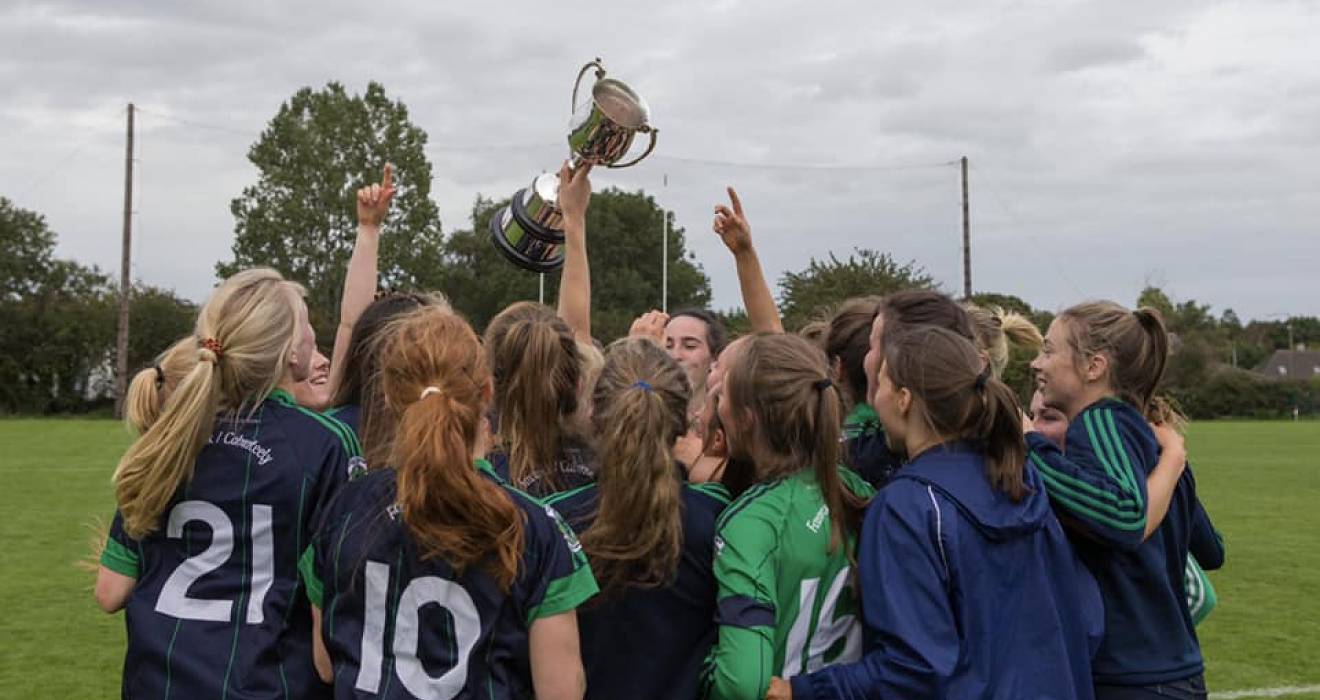 The attacking triumvirate of Amy Connolly, Jodie Egan and Ashling Murphy hit 1-2 apiece at Lawless Memorial Park on Saturday afternoon to propel Foxrock/Cabinteely towards their sixth consecutive Dublin Ladies SFC title.Seeking revenge for their agonising extra-time defeat at the hands of Foxrock in the 2019 decider, Kilmacud Crokes played with tenacity and courage throughout.

The combined scoring forces of Julia Buckley (2-3) and Eabha Rutledge (0-3) kept them within touching distance of a maiden crown at this grade and they had led for the vast majority of the opening period.

However, thanks in no small part to blitzes at the tail end of each half, Fox/Cab tightened their grip on the Michael Murphy Memorial Cup.

Last year’s final meeting between these two teams was a rip-roaring contest played over 80 plus minutes of compelling action. The southside rivals couldn’t be separated in normal time and a replay had loomed large until Connolly recorded a brace of late points to get Foxrock over the line.

Courtesy of successive victories at the expense of St Sylvester’s, Clontarf, Na Fianna and Thomas Davis, the holders secured top spot in Group One of this 2020 championship with five points to spare. They were placed under intense pressure by Ballyboden St Enda’s for large stretches of their semi-final showdown at Kilbogget Park, before eventually coming away with a 4-13 to 3-10 win.

Similarly, Crokes enjoyed an unbeaten march to this phase of the competition. Ballyboden, St Brigid’s, Fingallians and Clanna Gael Fontenoy were accounted for in Group Two, followed by a 4-15 to 2-12 triumph over Na Fianna in the penultimate rounds.

On both sides, there were a number of players - both past and present - who have featured for Dublin on the inter-county scene. This included duelling midfielders Sinead Goldrick (Foxrock) and Lauren Magee (Kilmacud), who are set to become club-mates at Melbourne FC when the new AFL Women’s season gets up and running in February 2021.

Although Foxrock drew first blood with an Ashling Murphy point inside the opening 60 seconds, Crokes responded in spectacular fashion. After Amy Conroy’s goal-bound strike had been turned away, Buckley was on hand to fire the rebound beyond the reach of opposition netminder Aisling Tarpey.

Buckley’s inside partner Michelle Davoren added a fisted point in the sixth-minute, before a close-range free by Jodie Egan helped Foxrock to settle. There was no shortage of endeavour from either side, with a succession of scoring opportunities being created at both ends of the pitch.

Magee was becoming more influential as the action progressed and she conjured a superb individual point to give Crokes a 1-2 to 0-2 cushion in the advance of the game’s first water break.

Whilst it had been a lively encounter up to this juncture, it truly came to life during a frenetic second-quarter. Buckley split the uprights to move Kilmacud four points clear, only for the excellent Connolly to rattled the net with an unstoppable shot on 23 minutes.

Yet this was immediately cancelled out by the elusive Buckley, who found the net from a tight right-hand angle - despite the best efforts of Sky Blues full-back Niamh Collins on the Foxrock line. Following excellent approach work by Laura Kane, Eabha Rutledge kicked another point for the rampant Stillorgan outfit.

Foxrock now found themselves five points adrift, but they received a major lifeline on the half-hour mark. Ashling Murphy was adjudged to have been fouled inside the area and after regaining her composure, the Wexford sharpshooter dispatched the resulting penalty to the Crokes net.

This was an ideal confidence boost for Alan McNally’s charges and with Connolly contributing a two-point salvo in stoppage-time, they were back on level terms (2-4 apiece) at the interval.

There was a sense that the Foxrock challenge was beginning to rise and, straight from the restart, they significantly underlined their championship credentials. Dublin senior panellist Egan burst through on the target and got the better of Crokes’ Rachael Fleming with a composed right-footed finish.

All the momentum appeared to be with Foxrock at this point and wing-forward Sinead Loughran was desperately unfortunate to see her ferocious effort on 37 minutes ricocheting off the crossbar. This was a major let-off for Crokes but with Buckley and Rutledge leading their charge, they forced their way back into the reckoning.

Either side of a free by the latter, Buckley posted points from play to restore parity to the proceedings (3-4 to 2-7). Subsequently, Crokes had a number of opportunities to edge into the ascendancy once more, with Rutledge and Mia Jennings both going agonisingly close to finding the range.

Foxrock ultimately weathered this storm, however, and gained a firm stranglehold in the closing minutes of the normal time. Egan kicked a point to edge them back into the ascendancy, while substitute Jess Connolly (sister of Amy) and Ashling Murphy did likewise off resulting attacks.

Crokes refused to throw in the towel and another Rutledge single left them with a fighting chance of snatching a victory from the jaws of defeat. With just under 10 minutes of stoppage-time played, the Foxrock defence understandably came under some sustained pressure.

A looping Rutledge free asked questions of Tarpey, but the outstretched arm of the Mayo custodian diverted the ball away from danger. With the likes of Connolly, Collins, Goldrick and Westmeath’s Fiona Claffey bringing their vast experience to bear, Foxrock/Cabinteely closed out the game with commendable efficiency to reinforce their position as the top team in the capital.