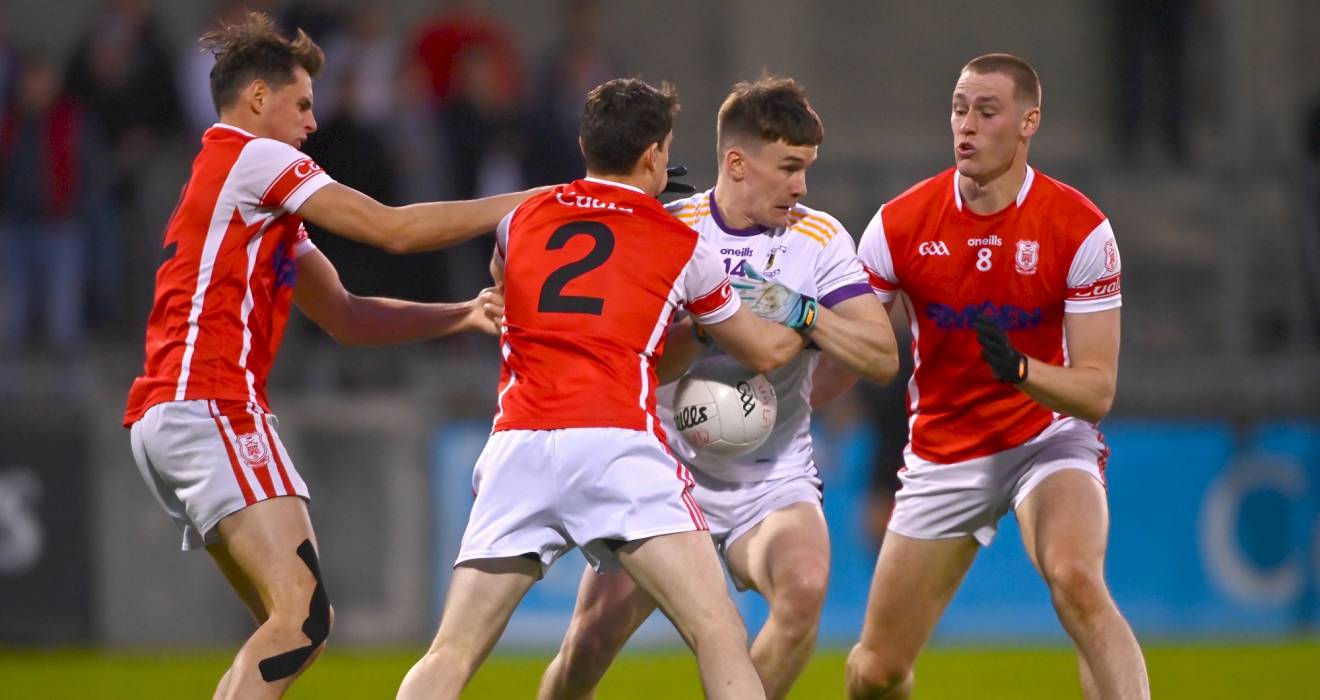 Defending champions Kilmacud Crokes progressed to the semi-final stage of the Go Ahead Dublin Senior One Football Championship with a hard-earned 0-14 to 1-9 triumph over Cuala at Parnell Park on Saturday.

One point adrift (1-8 to 0-10) inside the final-quarter following a goal from opposition attacker Niall O’Callaghan, Crokes held their composure to eventually see off the challenge of Austin O’Malley’s Dalkey men. Back-to-back winners of the competition in 2004 and 2005, the Stillorgan club will be seeking to emulate this feat in the coming weeks.

Cuala themselves had collected successive Senior Two Championship crowns in the past two seasons and opened their account in this game through Dublin senior attacker Con O’Callaghan - after Paul Mannion and marauding corner-back Dan O’Brien had found the range for Crokes.

A Dara Mullin effort had helped the title holders - who also claimed Leinster glory in 2021 - to regain their two-point advantage, before Luke Keating and Con O’Callaghan got Cuala back on level terms. Despite leaking additional scores to the ever-lively Craig Dias and Mannion, the challengers hit a purple patch in attack.

Cuala failed to register a single wide in the opening period and with Niall James, Keating and Con O’Callaghan all finding the range, they moved into the ascendancy for the first time on 21 minutes. Conor Mullally proceeded to cancel out Mannion’s third point of the contest, but Crokes ultimately brought a slender 0-8 to 0-7 buffer into the interval.

Having missed a couple of earlier strikes at goal, Galway footballer Shane Walsh (making his first start for Robbie Brennan’s charges) knocked over a brace of frees for Kilmacud. He added to his personal tally with a perfectly-executed mark on the resumption, though Con O’Callaghan - who was recently nominated for an All Star alongside Walsh - was quick to respond at the opposite end.

Mansion posted a score off his right foot, before going down with an ankle injury that eventually led to him being withdrawn. While he was receiving treatment, Cuala went up the other end of the pitch and Niall O’Callaghan toe poked home for a three-pointer on 46 minutes.

A double blow in 60 seconds for champions Crokes. Paul Mannion is forced off through injury, Niall O'Callaghan finds the net for Cuala
Watch live coverage of @KCrokesGAAClub v @CualaCLG in the Dublin SFC quarter-finals on @RTE2 and @RTEplayer https://t.co/eReU6snW0Y #GAA pic.twitter.com/sRZlkBfa6D

This threw down the gauntlet to Crokes, but they responded in the manner expected of champions. Supplementing a brace from Walsh (who finished the tie with 0-5 to his name), Mullin and substitute Shane Cunningham ensured their side had reclaimed a stranglehold in the Donnycarney venue.

James did punch over a stoppage-time point for Cuala, but their bid for a last-four spot just fell short in the end.

In the curtain-raiser at Parnell on Saturday, 14-man Na Fianna held off a spirited display from local rivals Whitehall Colmcille by the slenderest of margins (1-12 to 1-11).

Keith Campbell responded with a spectacular point for Whitehall, only for McHugh to palm to the net on 24 minutes after Darragh Cummins had saved an initial strike by Na Fianna forward James Doran.

Watch the game live on RTÉ2!

Sean and Lee Gannon gave Whitehall a reason to be cheerful with consecutive scores from acute angles, but an Ali Fitzgerald single ensured their Glasnevin counterparts were 1-5 to 0-4 in front at the break.

Cormac Costello and Na Fianna goalkeeper David O’Hanlon traded frees after the restart, before Colmcilles found themselves five points adrift at an advanced stage of the second half. The Collins Avenue side later narrowed the gap to three, however, and were back on level terms in the 50th-minute when Costello slotted home a penalty.

Jonny Cooper was dismissed on a second yellow card in the lead-up to this dead-ball effort, but Na Fianna remained calm in the face of adversity. McHugh (two) and Aaron Byrne kicked three points on the bounce and even though Costello (free) and O’Donnell raised white flags deep into time added on, Na Fianna did just enough to make it into the penultimate rounds.

Their opponents in the last-four will be Ballyboden St Enda’s, who secured a 3-15 to 3-10 victory at the expense of Ballinteer St John’s on Sunday.

Four-time champions at this grade, ‘Boden were favourites to prevail against their southside rivals and return to the semi-finals for the fifth season running. An early penalty from Jack Lundy bolstered the prospects of Ballinteer, but Kenny Naughton’s Firhouse Road men responded emphatically to this set-back.

A scoring sequence of 1-6 without reply - including three points from All-Ireland winner Colm Basquel and a 15th-minute Warren Egan goal - helped ‘Boden to establish their authority on the play.

Paddy Connaughton, Luke Breathnanch, Donnacha Carey, Colm Fitzpatrick and Oran McIvor all found the target to get John’s back into contention, only for a brace of Basquel scores to propel Ballyboden towards a 1-9 to 1-6 interval buffer.

The 2015-16 All-Ireland champions edged a step closer to a last-four spot on the resumption with goals by Egan and Darren O’Reilly in the 34th and 41st minutes. They progressed from there to develop a 10-point lead (3-13 to 1-9) with just over five minutes of normal time remaining.

Credit must go to Ballinteer, however, as quickfire goals from Fearghal Duffy and David Devereux gave them a fighting chance in the closing moments of the action. A Lundy point reduced the deficit to three points, but Ballyboden were not to be denied.

Joining fellow veterans Michael Darragh Macauley and Declan O’Mahony off the bench, Conal Keaney (who turns 40 next weekend) kicked two outstanding points to ensure Ballyboden made it into the next phase.

Attacking triumvirate Egan, Basquel and O’Reilly played a major part in their success on the day, contributing a combined haul of 3-9. Lundy (1-3) and Duffy (1-1) were amongst those to shine for Ballinteer, who have marked themselves out as an upcoming team throughout 2022.

Meanwhile, 2019 finalists Thomas Davis completed the semi-final line-up with a comprehensive 1-12 to 0-5 win over Castleknock in the second game at Parnell Park on Sunday.

Having earned a place in the knockout rounds with a dramatic group stage victory against St Jude’s 15 days earlier, Davis’ set out their stall with a powerful opening period showing. Thanks to scoring contributions from Fionn Murray (two), Conor Guilfoyle, Eamon Conroy, Sean Farrelly, Cian Murphy and Eoin Kirby, the Tallaght men brought a 0-7 to 0-2 lead into the dressing rooms.

Ger McDermottroe and Rob Shaw were the ones to find the range for Castleknock in the first half, and even though Tommy McDaniel, Kevin Stephenson and Eoin O’Brien also raised white flags on the restart, the Somerton Park side were ultimately second best. Whereas Dublin footballer Ciaran Kilkenny was denied by Davis’ netminder Robert Crilly, Conroy found the net at the opposite end on 42 minutes.

While Conroy (1-1) and Murray (0-4) emerged as scorers-in-chief for Thomas Davis, Guilfoyle’s three-point haul also went a long way towards sealing a commanding triumph for Ciaran Farrelly’s charges. They will now take on Kilmacud Crokes in what promises to be a mouthwatering final-four encounter.

In the Senior One Championship relegation play-offs, Raheny retained their top-tier status with a 1-11 to 0-9 success over Clontarf at St Margaret’s on Sunday.

Skerries Harps took on Round Tower Lusk a day earlier at Clann Mhuire GFC and secured a convincing 4-11 to 1-8 victory to bring a satisfactory conclusion to their championship campaign.