Cuala produced a superb second half turnaround at Parnell Park on Saturday to get the better of Ballyboden St Enda’s in Group One of the Go Ahead Dublin Senior One Hurling Championship.

Seven points adrift (2-15 to 0-14) with 41 minutes on the clock, the Dalkey club were seemingly heading towards their first defeat of the campaign. However, the eight-time champions dug deep in the closing stages and ultimately got the better of their southside rivals.

Outscoring David Curtin’s men by 2-9 to 0-2, Cuala emerged triumphant on a final scoreline of 2-23 to 2-17. Not only did this win - their fourth in succession - help them to leapfrog ‘Boden, it also secured an automatic place at the semi-final stage of this top-tier competition.

Over the course of the opening period in the Donnycarney venue, the sides were level on no fewer than five occasions. Seven points from the reliable David Treacy propelled Cuala into the ascendancy as the interval approached, before ‘Boden turned on the style at the opposite end.

Paul Ryan had been one of their best performers up until then, but it was his former county colleague Conal Keaney who propelled them in front with a 27th minute goal. Points followed from Simon Lambert, Niall McMorrow and Ryan (free) to give the Firhouse Road outfit a 1-12 to 0-11 buffer at the break.

Treacy sought to calm the Cuala nerves with a dead-ball effort of his own, only for McMorrow to grab a second ‘Boden major just two minutes after the resumption. Shane Durkin and Ryan points helped the seven-time winners to keep pushing forward, but Cuala eventually got to grips with the task at hand.

While a Stephen O’Connor point kept ‘Boden five ahead on 49 minutes, this was their final score of the contest. Cuala got the spark they needed moments later as full-forward Mark Schutte rattled the net from close-range.

This was supplemented by Sean Moran’s 54th-minute goal from a penalty, dispatched with typical aplomb beyond the reach of opposition netminder Finn McGarry. Cuala suddenly found themselves in the driving seat and they never looked back from there.

Five points without reply - including braces for David Treacy and Dublin senior hurler Con O’Callaghan - ensured the spoils went the way of the Hyde Park side. Although the ever-dependable Treacy chipped in with a personal haul of 0-12, three points apiece from Colm Cronin and O’Callaghan perfectly supplemented the goals by Schutte and Moran.

Ryan (0-9) and McMorrow (1-2) were amongst those to shine for ‘Boden, but the 60th-minute dismissal of Keaney for a second yellow-card offence did make a late fightback extremely difficult. 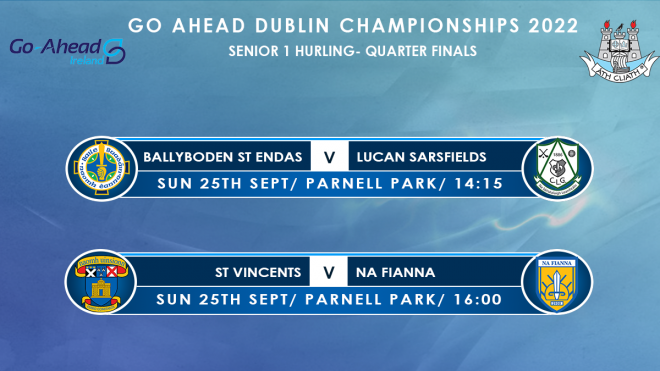 Joining Ballyboden in a forthcoming quarter-final will be 2021 runners-up Na Fianna. It has been a somewhat mixed campaign for the Glasnevin men in Group One, but a narrow 2-15 to 1-16 success over St Oliver Plunkett’s/Eoghan Ruadh at O’Toole Park on Saturday proved crucial in squeezing them into third spot.

Na Fianna created daylight during the early exchanges with a fifth-minute goal from Shane Barrett, before Plunkett’s came storming into contention with Niall Arthur and Cian Boland both prominent. Ben McSweeney also rattled the back of the opposition net, but with Liam Rushe doing likewise, the St Mobhi Road outfit brought a 2-9 to 1-9 advantage into the interval.

Plunkett’s continued to pile the pressure on when the play resumed, but with Colin Currie contributing 0-3 from play, Na Fianna claimed the maximum points on offer.

Their opponents in the last-eight of the championship will be northside neighbours St Vincent’s, who finished second in Group Two despite suffering a 2-25 to 3-18 reversal to defending champions Kilmacud Crokes in Saturday’s curtain-raiser at Parnell Park.

Vins needed a win in order to secure that automatic semi-final spot and full-forward John Hetherton certainly did his best for the cause. He finished the game with an astonishing personal tally of 3-10 and got his first goal of the action with just five minutes gone on the clock.

Alex Considine responded with a three-pointer of his own for Crokes and with Oisin O’Rorke in flying form, the Stillorgan side led for large stretches of the opening period. Another Hetherton goal in the 21st-minute helped Vins to regain the initiative, but Crokes were attacking with confidence and were on level terms (1-12 to 2-9) at the interval.

Kilmacud threatened to pull away in the third-quarter, but Hetherton was determined to leave an indelible imprint on the game. He got six points from the 33rd to 53rd minute as the challengers from Marino refused to yield and remained on course for the victory they craved.

Crokes talisman O'Rorke knocked over four points in the same juncture, while Fergal Whitely, Fionn O Ceallaigh and Ronan Hayes also found the range. Kieran Dowling’s title holders finally created some daylight with unanswered singles courtesy of O’Rorke, Whitely and Considine, before a Whitely major on 57 minutes had them on the brink of accruing maximum points from four group encounters.

Even though Hetherton sealed his hat-trick with another superb finish in stoppage-time, Michael Roche, Whitely and O’Rorke made sure it was Kilmacud who came out on top. Whilst he couldn’t quite match Hetherton’s exploits, O’Rorke did register a healthy sum of 12 points.

Meanwhile, Lucan Sarsfields claimed the coveted third spot in Group Two thanks to a 2-17 to 1-11 success at the expense of St Brigid’s in O’Toole Park on the same day.

Dublin senior hurler Chris Crummey and Chris O’Leary were amongst the goals as Lucan overcame a comprehensive loss to Kilmacud in the previous round to finish a point ahead of Brigid’s in the final standings.

Beaten finalists against Ballyboden St Enda’s in 2013, Sarsfields will now take on the same club in the last-eight of the 2022 edition of the championship.