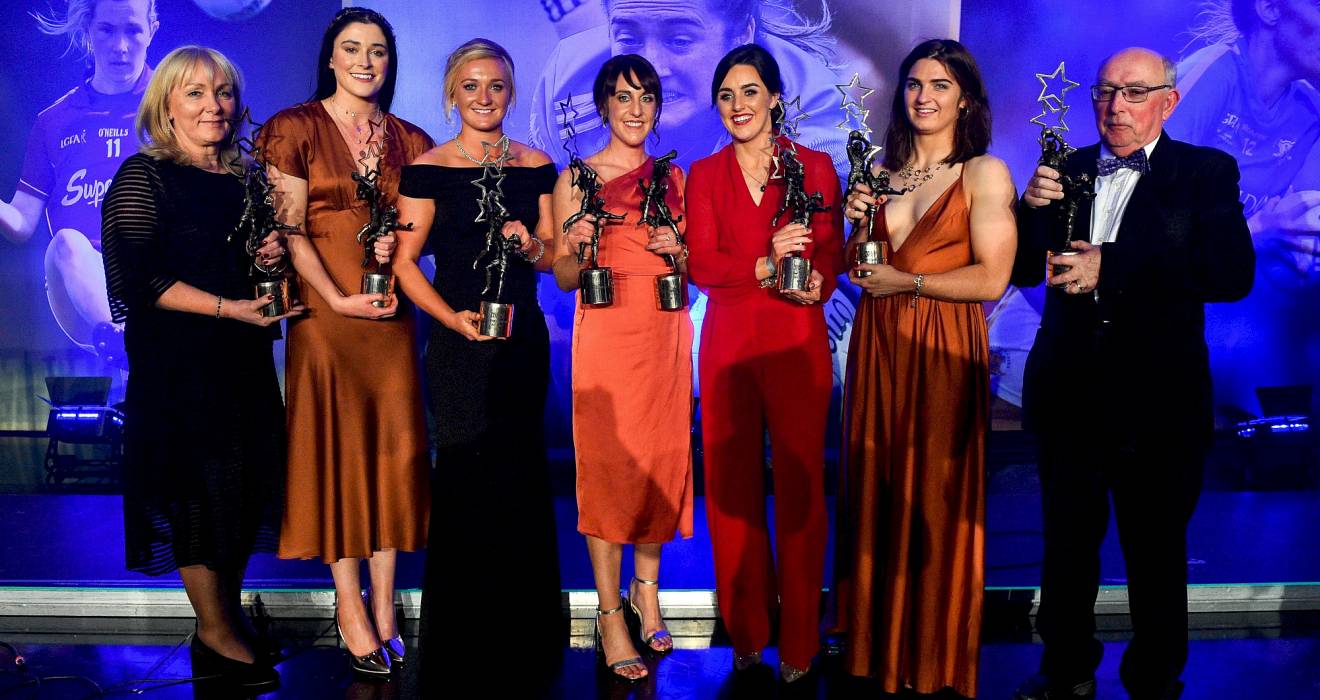 Dublin’s haul matches their all-time best of seven players on the annual selection, which was also achieved last year.

The 2019 team was revealed on Saturday night at the annual TG4 All Star awards banquet, in association with Lidl, at the Citywest Hotel.

Dublin’s Sinéad Goldrick wins a seventh All-Star award in eight years, and there’s a fifth award for team-mate Lyndsey Davey, who was Player of the Match against Galway in the 2019 TG4 All-Ireland Senior Championship Final, which was played out in front of a record 56,114 attendance.

Another Dublin star, Siobhán McGrath, is honoured for a fourth time, while there’s a third award for team-mate Carla Rowe.

Siobhán McGrath was named as the 2019 TG4 Senior Players’ Player of the Year at the annual All Star banquet, in association with Lidl, at the Citywest Hotel on Saturday night.

McGrath was superb throughout the season as the Sky Blues went on to claim a third successive TG4 All-Ireland Senior Championship title in front of a record 56,114 attendance at Croke Park on September 15.

McGrath was the popular choice of her peers to claim the TG4 Senior Players’ Player of the Year award, beating off stiff competition from Dublin team-mate Sinéad Goldrick and Galway’s Louise Ward, who also won All Stars on the night.

It’s the third successive year that a Dublin player has won the TG4 Senior Players’ Player of the Year award, following wins for Noelle Healy in 2017 and captain Sinéad Aherne in 2018.

Galway defender Sinéad Burke and Cork forward Orla Finn, who was joint top-scorer in the 2019 Senior Championship, both collect their second awards.

The 2019 selection is also noteworthy for the presence of Galway twin sisters Nicola and Louise Ward in the prestigious 15.

Nicola and Louise are the first set of twin sisters named in an All Star team since Waterford’s O’Ryan twins, Martina and Geraldine, back in 1992.

It’s also the third successive year that sisters are named on an All Star selection as the Hegartys from Donegal, Ciara and Niamh, were listed on the 2017 team, while the O’Sullivans from Cork, Ciara and Doireann, were honoured in 2018.

Nicola and Louise Ward will now turn their attentions to next weekend’s All-Ireland Senior Club Championship Final, when Kilkerrin-Clonberne will pit their wits against holders Mourneabbey from Cork.

There are nine first-time winners on the 2019 TG4 All Star team, including Dublin’s Niamh Collins, Olwen Carey and Niamh McEvoy.

Monica McGuirk earns the goalkeeping spot for her exploits with Meath, who contested the TG4 All-Ireland Intermediate Final, and it’s also a first All Star for the Royal County since 2011, when another goalkeeper, Irene Munnelly, was honoured.

The other first-time All Star recipients are Melissa Duggan (Cork), the aforementioned Ward sisters, Tracey Leonard, the Galway captain, and Mayo’s Rachel Kearns.

Galway’s haul of four All Stars is second behind Dublin on the 2019 selection, while two players from Cork, and one each from Meath and Mayo complete the line-up.

In total, there are four survivors from the 2018 All Star team – Dublin trio Goldrick, McGrath and Davey, and Galway’s Burke.

It was also confirmed on the night that the 2020 TG4 All Star Tour will visit Austin, Texas, in the United States, with the tour scheduled for March 31-April 8.

TG4 and the LGFA have also confirmed that Ladies Football will feature in next year’s reality TV show ‘The Underdogs’, the television series which is broadcast on TG4 each Autumn.

Ladies Football featured on the Underdogs TV Series on three occasions in the past – in 2006 against Cork in Páirc Uí Rinn, in 2007 against the New York All Stars in Gaelic Park, Bronx, and against the London Ladies team in 2008 under lights at Sunbury, the home of London Irish.

More details on the 2020 Underdogs TV Series will be announced in the coming months.

Also on the night, Mayo star Niamh Kelly won the TG4 ‘Score of the Season’ award for her stunning goal against Galway in the 2019 TG4 All-Ireland Senior Championship semi-final at Croke Park.

Kelly’s mother, Breda, accepted the award on her behalf, and it was presented by LGFA President Marie Hickey during a ‘Red Carpet Live’ Facebook event on the Spórt TG4 page.