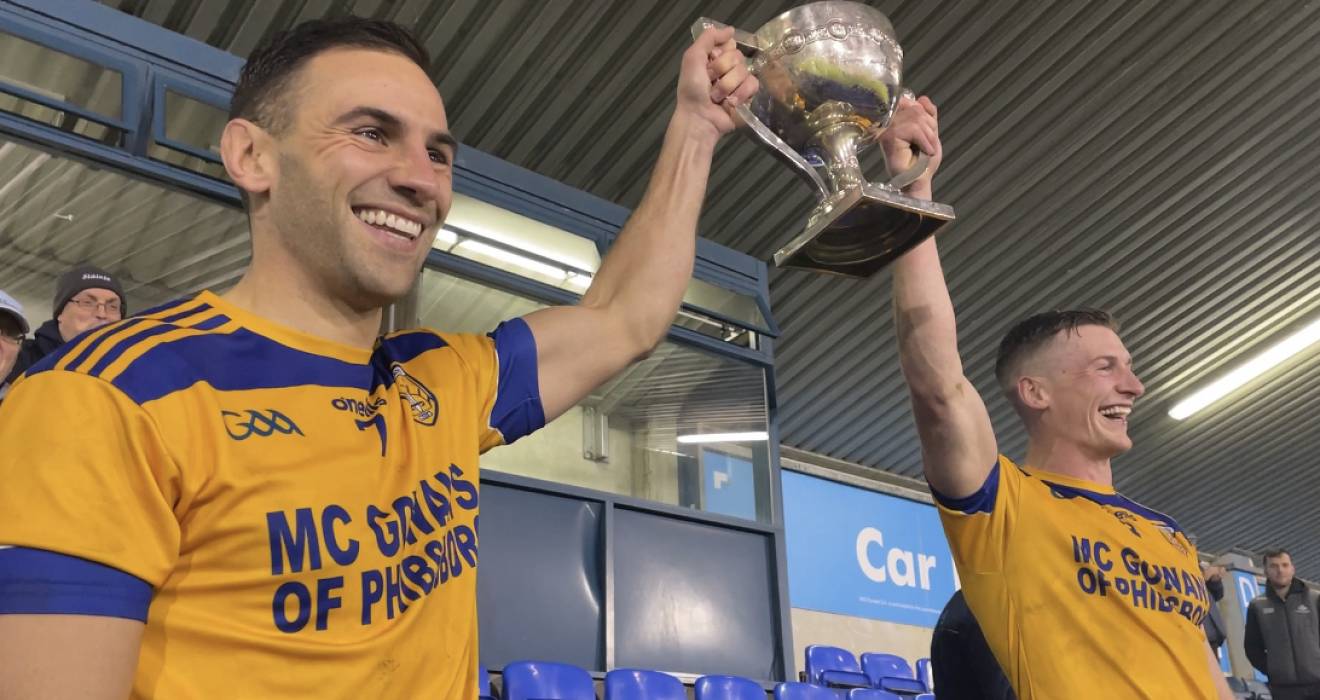 This dynamic duo were two of eight players to get their names on the scoresheet for the winners and even though Niall Coakley registered a brace of goals for their southside counterparts, Na Fianna remain the AFL1 kingpins for another year.

Despite facing a Thomas Davis side that had previously been unbeaten in the league - and got the better of them in the group stages of the Dublin Senior One Football Championship - Jude’s recorded a 1-10 to 1-8 triumph against the Tallaght men in a semi-final showdown at Kiltipper Road on November 6. Four days earlier at the National Games Development Centre in Abbotstown, Na Fianna booked their own spot in this showpiece with a 2-9 to 1-8 success over Ballyboden St Enda’s.

Na Fianna had also encountered Jude’s in Group Three of the top-tier championship at the same venue on August 19 and came away with a 2-8 to 0-9 victory. The Glasnevin outfit subsequently fell just short to Kilmacud Crokes in an SFC1 decider, but had their sights set on a positive end to 2022.

Jude’s came into this game with the same aspirations, however, and enjoyed a storming start to the contest. After Pat Spillane had a goal bound effort turned behind with just 15 seconds gone on the clock, Darragh Rooney brilliantly split the uprights from the resulting ’45’.

Cork native Coakley was playing alongside Spillane and Rooney in the Jude’s full-forward line and he superbly fired to the top corner of the Na Fianna net off his trusty left boot in the third-minute of the action.

Having provided the final pass for Coakley’s finish, Jude’s wing-forward Simon Murphy later had a goal chance of his own. He was picked out by Spillane following a trademark lung-bursting run from the Sligo footballer, but Murphy’s eventual effort drifted agonisingly past the right-hand post.

Although Na Fianna initially struggled to make an attacking impact, they were starting to find their feet as the first-quarter mark approached. Caffrey opened their account with an 11th-minute point from play, before McHugh and David Quinn did likewise to bring the gap down to the bare minimum.

While Coakley helped Jude’s to settle again with a converted mark, Na Fianna edged into the ascendancy for the first time when David Lacey (a superb effort from distance), McHugh and Caffrey all found the target in quick succession.

The northsiders were beginning to play with extreme confidence and doubled their lead on 21 minutes after Sky Blues star Jonny Cooper picked out raiding corner-back Darragh Kennedy for a close-range point.

A second Rooney score at the opposite end disrupted this purple patch, only for Na Fianna to reinforce their authority through the in-form Quinn and McHugh. As expected, Jude’s persevered with their challenge and received a massive boost at the end of normal time.

The Templeogue side created another three-point opportunity off a patient move and Coakley appeared to apply the final touch for a much-needed second goal. Yet in spite of this set-back, Na Fianna still brought a 0-10 to 2-3 buffer into the interval courtesy of a third Caffrey contribution in stoppage-time.

This set things up nicely heading into the second half, which saw both sides playing with admirable attacking intent. Either side of back-to-back scores from Lacey and Aaron Byrne for Na Fianna, the increasingly-influential Murphy kicked majestic points on the right-wing to keep Jude’s firmly in the reckoning.

David O’Hanlon was pleased to see a couple of shots on goal dropping into his arms as the third-quarter progressed and the Na Fianna netminder (who is also one of several Dublin panellists in his club) stepped forward to slot a ’45’ between the posts in the 42nd-minute.

Caffrey was proving himself to be one of the stand-out performers in this tie and he added a fourth point inside the final-quarter - a sublime strike out towards the right-hand touchline. This left Jude’s three in arrears (0-14 to 2-5), but with eight-time Celtic Cross winner Kevin McManamon introduced off the bench, the Tymon Park side weren’t out of contention just yet.

Both managements dipped into their reserve options as the final whistle approached, but it was the starting players who continued to keep the scoreboard ticking over. At either end of the pitch, McHugh and Rooney slotted over the first and only pointed frees for their teams.

However, an exceptional point from wing-back Ali Fitzgerald offered Na Fianna some breathing space and this helped the St Mobhi Road brigade to claim the victory that they craved.