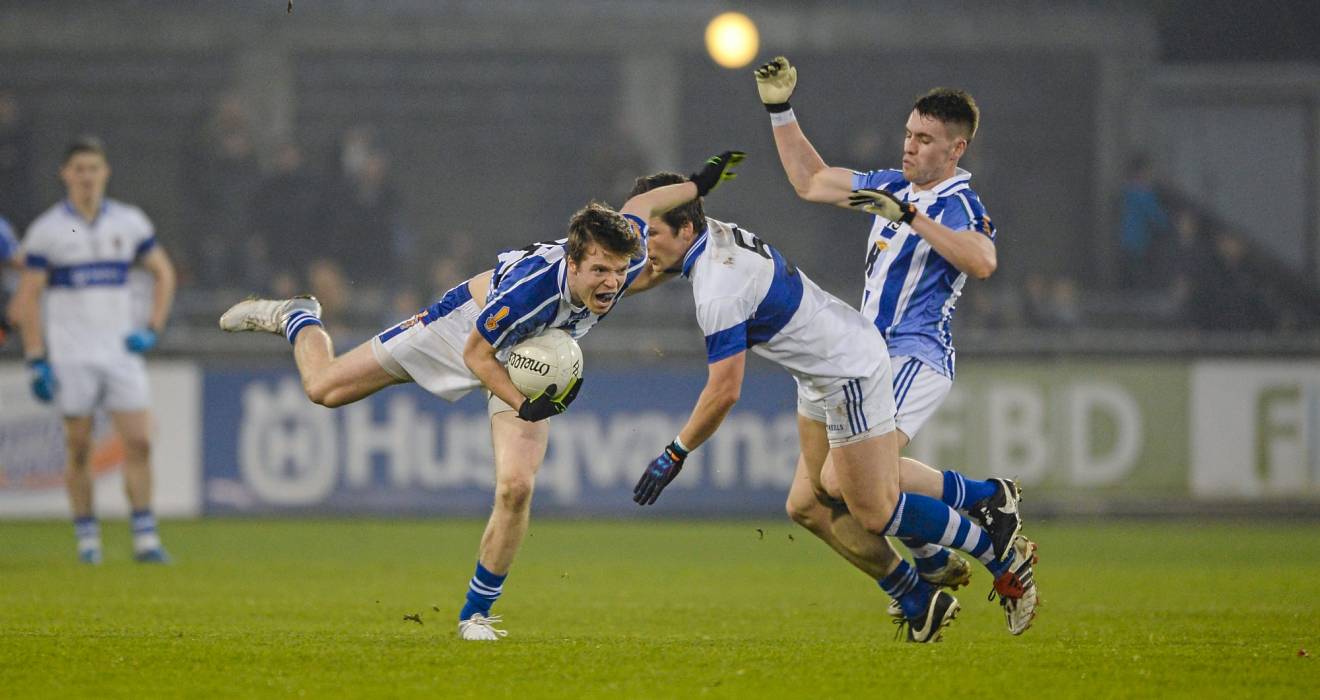 Two of the modern heavyweights of Dublin club football will collide in this Wednesday night's SFC1 Round 2 when St Vincent's host Ballyboden St Enda's in Páirc Naomh Uinsionn (7.30).

A victory for either side on Wednesday night will propel that team very much into the driving seat in SFC1 Group 3 after they both enjoyed opening round victories.

The sides met in the 2015 decider when Ballyboden St Enda's prevailed 2-8 to 0-10 after hitting the ground running from the first whistle with Ryan Basquel particularly prominent.

Current holders of the both the Dublin SFC1 and Leinster titles, Ballyboden St Enda's, made a winning start to their defence when recovering from a slow start before defeating Clontarf (4-20 to 0-8) in Páirc Uí Mhurchú in Group 3 Round 1 .

Boden trailed by two clear goals (2-5 to 0-5), both scored by Kevin Lillis, inside the opening quarter before Boden wrested control of their encounter.

During the tricky opening spell the experience of the evergreen Conal Keaney was crucial for the defending champions.

His manager, former Kildare star Anthony Rainbow, was effusive in his praise of the 38-year-old afterwards.

"He’s in incredible shape. Only for him we were in big trouble in the first 15 minutes. He was incredible, absolutely incredible.”

Other players to catch the eye for Boden included Colm Basquel, who scored 1-10 (0-5f), Ross McGarry (0-4) with Dublin minor of 2014, Warren Egan, taking both his goals very impressively.

While the Covid-19 enforced deferral of the Championship means it will now be run off in quick succession the Boden boss thinks his players may have benefited from the break following a long, hard season in 2019.

"We finished up on the fourth of January. We were back training probably three weeks later for the league which started mid-February and we were looking at championship then in April," said Rainbow.

"And then the whole Covid-19 thing happened. I think probably the break has done us the world of good.

"We probably needed more than three weeks off because, if you look at it, we’ve been going solid for the last two years really without a break.

"So those couple of months have benefitted the team and they’ve come back a bit fresher.”

If Keaney is one of the more experienced footballers (and hurlers) in the county he has to take his place on the grid behind a player he'll face next time out - Tomás Quinn.

Quinn, an 11-time Dublin Blue/Dubs Star recipient, was celebrating a 21st of a kind when he inspired Vincent's to their 2-15 to 1-13 victory over Whitehall Colmcille at Collins Avenue in their opener.

Quinn made his SFC debut as a sub during his club's 2000 campaign so this year's renewal is his 21st year in-a-row to play in the capital's blue riband club football competition.

At the other end of the tape in terms of SFC championship experience for Vinnies were midfielder Liam McGovern and wing-back Mark L'Estrange who were both making their starting debuts while defender Conor O'Brien came on as a substitute to make his SFC bow.

In the other Group 3 game on Wednesday night Clontarf will host Whitehall Colmcille in St Anne's Park (7.30).

St VIncent's edged out Whitehall Colmcille 2-15 to 1-13 in Round 1 with Cormac Costello getting the home side's goal at Collins Avenue before a late Tomás Quinn penalty eventually seeing the Marino men to victory after the home side had applied plenty of late pressure. Current Dublin U20 panellist Seán Lowry got Vincent's first goal.

Quinn tallied 1-8 in total (1-0 pen, 0-4f, 0-1 '45') as he starred for the winners while Dublin hurler Eogan O'Donnell was very impressive in attack for Whitehall with his ball-winning ability.

O'Donnell also played provider for Whitehall's early goal when he cut out a ball out of the Vincent's defence before attacking with pace and offloading to Costello who side-footed to the net with his left.

Whitehall quickly tagged on a point when defender, Dublin U20 Lee Gannon, joined the attack to fire over impressively to give his side a 1-1 to 0-0 lead inside four minutes.

Two Tomás Quinn frees, the first from 43 metres, was followed by a Diarmuid Connolly free, from his hands off the left, to close the gap to 1-1 to 0-3.

Costello hit frees either side of a fine Liam McGovern, who was make his club SFC debut, point and the sides exchanged scores in a decent opening half with Quinn (two frees), Connolly (free) and Seán Lowry on target for Vinnies and Costello bringing his first half tally to 1-3 (0-3f) as the sides entered the half-time break with the Marino men 0-9 to 1-4 in front.

Vincent's, after concluding the opening half with three unanswered points, maintained that momentum on the restart.

Brian Mullins' men were far more clincial with possession than their opponents during this spell with Greg Murphy and Tomás Quinn, his sixth point (0-3f, 0-1 '45') extending their advantage to 1-11 to 1-4 by the 36th minute.

Shane Carthy, with the first of his two second half points from play, made it 1-12 to 1-6 but inside the final ten minutes, including injury time, Whitehall came with a late scoring surge.

Cormac Costello brought his tally to 1-8 (0-7f) with Hugh McInerney and Keith Campbell also on target s they closed the gap to two points before Tomás Quinn converted from the penalty spot following a foul on Mark L'Estrange, another who was making his club SFC starting debut.

In SFC1 Group 4 Kilmacud Crokes put six goals past Raheny (6-13 to 0-10) in their opening contest at Silver Park and face St Oliver Plunkett/Eoghan Ruadh away this Wednesday.

Dublin senior Paul Mannion scored 2-6 overall, his first goal coming in the opening minutes while Dublin U20 Conor Kinsella got a second before the break as the Stillorgan men held a 2-8 to 0-4 advantage at the half-time.

The conveyor belts continue to work diligently in Stillorgan with many more new faces emerging in recent seasons such as Michael Mullin, younger brother of former Dublin U21 panellist Dara, Dara Jones and Mark and Niall O'Leary to complement their older charges as they try find that winning blend of youth and experience.

The display of Cian O'Sullivan at centre-back was one big positive for the Stillorgan men as seven-time All-Ireland SFC winner has been curtailed in recent seasons once the intercounty scene had concluded.

Crokes will face Plunkett's at Martin Savage Park with the home side eager to rebound from the opening round defeat to Castleknock.

In Group 1 Ballymun Kickhams and Thomas Davis were both winners in Round 1 so they enter the next round knowing victory will see them into the knockout stages (as they face each other in Round 3).

For Kickhams Dublin senior duo Dean Rock and Paddy Small were in top form - combining for a total of 2-13 with their side utilising the 'advanced mark' to telling effect at times.

The 'Mun face Round Towers Lusk (who lost to Thomas Davis) away while the Kiltipper Road men travel to Skerries, who lost to Ballymun in their opener.

With eight games ahead this coming Wednesday night we'll have a much clearer picture with regards to who will make up the last eight of this year's Dublin SFC1.