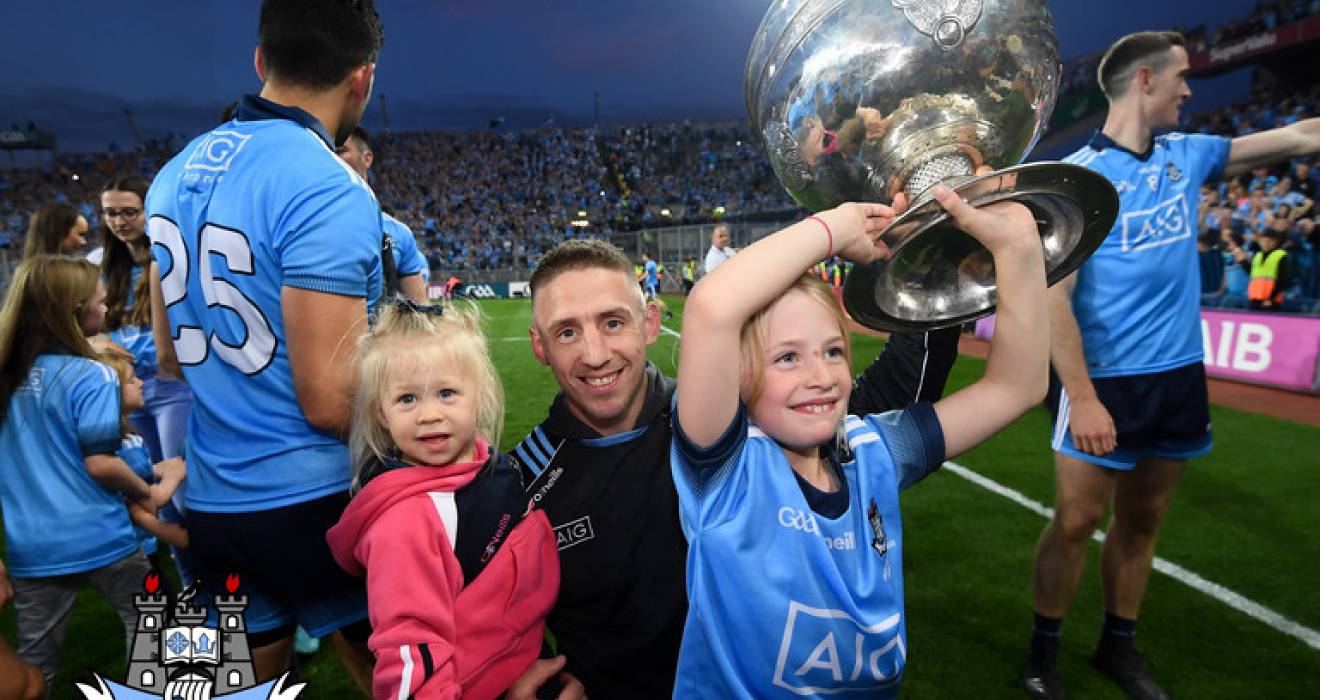 Eoghan O'Gara has decided to call time on his brilliant intercounty career after over a decade in the blue jersey.

I have spent 11 years living out my dreams as a kid growing up in this great city. As I call an end to what has been the most phenomenal experience of my life I would like to thank the following:

“My parents and my nine siblings for shaping me and giving me the burning desire to never give up on that dream.

“My extended family for the constant unwavering support.

“My club Templeogue Synge Street for their never-ending support and guidance from so many generous and selfless people along the way since I was eight-years-old. Joe O’Reilly, Philip Murphy and the late Vincent Walsh who mentored me and gave me the grá for Gaelic football and belief in myself.

“To ‘The Blue Panther’ Anton O’Toole, a man who inspired me and showed me the way to the top via my actions, not my words. A man who embodied all the values a sportsperson and a person should have. To get to follow in his footsteps and then share the field with my club-mates Denis and Niall in a blue jersey was an absolute honour and privilege.

“To my partner Elaine for all the many sacrifices, putting her life on hold and giving me whatever time and space I ever needed to chase that dream and for putting up with me along the way. Thank you. My two beautiful daughters, Ella and Fiadh, who kept me motivated and for always having my back and making me smile.

“To ‘Pillar’, Pat Gilroy and Jim Gavin who all had faith in me and helped me improve as a player and a person and whose love for Dublin GAA was infectious.

“To every member of the Dublin senior football management and medical team during my time who always went beyond the call of duty whenever required.

“Thanks to the many passionate and loyal Dublin supporters who always made their presence felt hail, rain or shine and whose pride in us always added extra motivation.

“The people I have shared it with, and the experiences I have shared with them, have made me a better person and given me the tools to grow more than I ever thought possible. Some of the best people you could ever wish to meet.

“To every one of my team-mates past and present, the brothers and family I was lucky to spend so much time with and to get to know and go to battle with. Men, characters and leaders of the very highest calibre. There aren’t words to describe my gratitude and love for you. Some great friends I hope to keep for a very long time.” 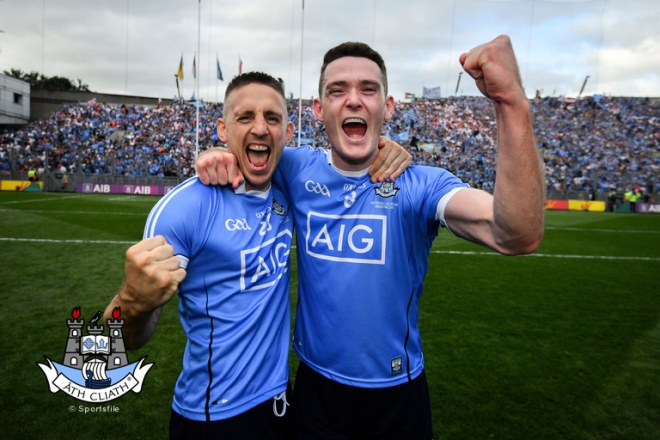 The Templeogue Synge Street clubman was a member of the Dublin team that won the 2008 All-Ireland JFC title, the first time since 1960 that Dublin had secured the title, a more recently Dublin's five in-a-row senior panel.

Included among Eoghan's team-mates on the successful 2008 junior team were Darren Daly, Michael Fitzsimons, Denis Bastick and Jonny Cooper, men he was to enjoy several great days with at senior level.

The same season (2008) he made his NFL debut for Dublin seniors (scoring 0-1 after he replaced Bernard Brogan in the second half of the 3-20 to 0-7 NFL Division 2 clash in Parnell Park on April 5, 2008) and was a member of that summer’s panel that won the Leinster SFC (missing the summer of 2009 through injury) and went on to play 68 times - 36 SFC and 32 NFL games at senior intercounty level.

During his terrific career Eoghan won seven All-Ireland SFC, ten Leinster SFC and five NFL after making his SFC debut in 2010 against Wexford in a Leinster SFC quarter-final.

Eoghan was introduced at half-time that day, replacing Kevin McManamon, as the Dubs finally overcame the Slaneysiders 2-16 to 0-15 after extra-time.

Eoghan's last appearance for the Dubs came last August in Healy Park, Omagh when he scored the only goal of the game in Dublin's 1-16 to 0-13 'Super 8' victory over hosts Tyrone. 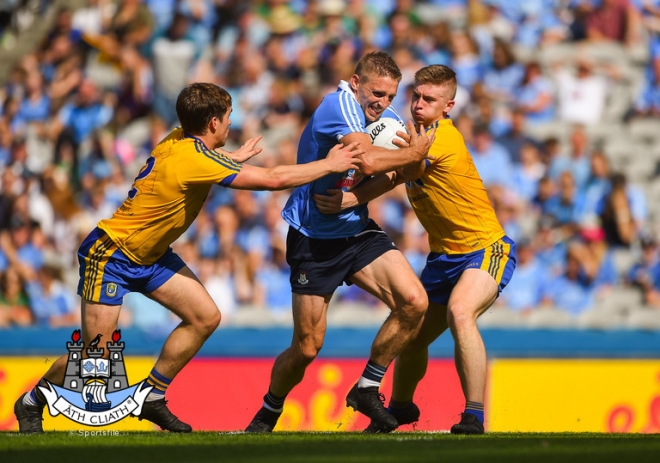 He also scored a championship goal against Tyrone during his debut championship season of 2010 when the Dubs defeated the Ulster side in an All-Ireland quarter-final, he had scored 2-1 earlier in the same summer against Louth in Round 4 of the Qualifiers.

He endeared himself to Dublin supporters with his whole-hearted, all-action style and delivered key scores for the Dubs late in big matches.

Eoghan came on as a sub (replacing Barry Cahill in the 53rd minute) as Dublin defeated Kerry in the never-to-be-forgotten 2011 All-Ireland SFC final.

Dublin's clash with Kerry in the 2016 All-Ireland semi-final was a superb duel with Eoghan converting a late point as the Dubs prevailed 0-22 to 2-14 on their way to his fourth All-Ireland medal.

Eoghan's habit of scoring goals against Tyrone was also witnessed in the 2017 All-Ireland SFC semi-final when he tallied 1-1 as Dublin cruised to a 2-17 to 0-11 victory.

In that year's All-Ireland decider Eoghan started at full-forward, scoring a point as Dublin captured the Sam Maguire after a nail-biting 1-17 to 1-16 victory over Mayo. 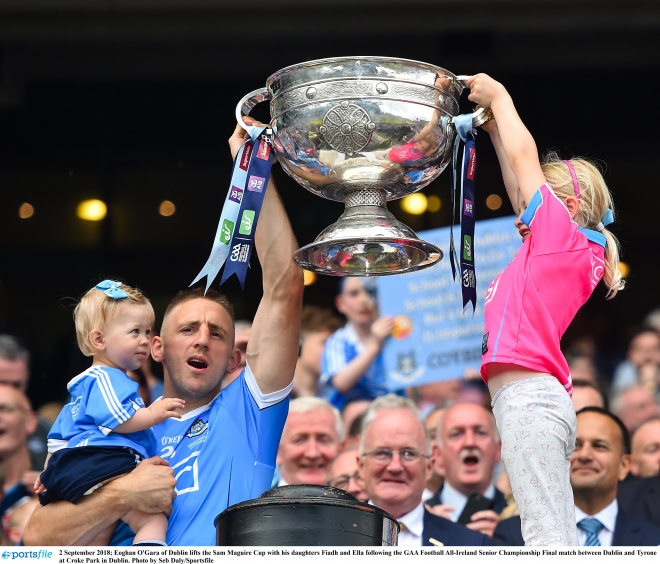