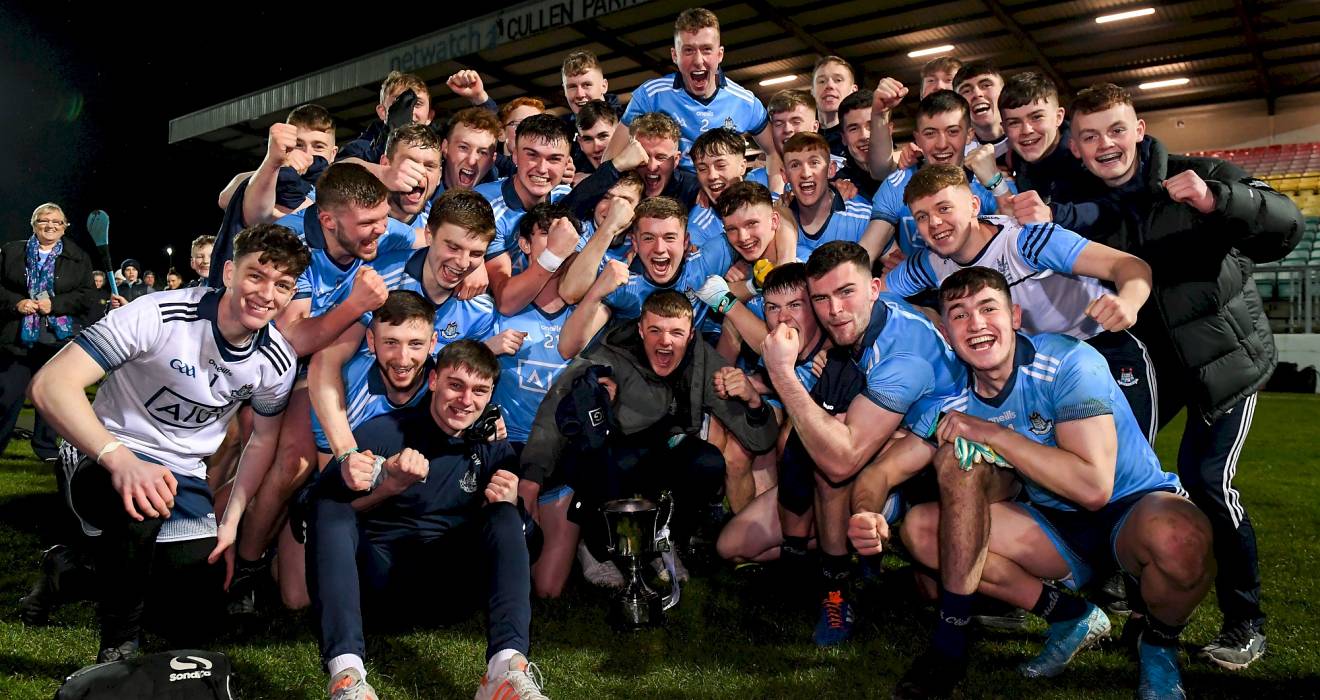 U20 footballers ready for All-Ireland semi-final against Tyrone

The Dubs secured back-to-back Leinster championships in early March when defeating Laois 0-18 to 0-8 at Netwatch Cullen Park, Carlow before the lockdown put a halt to the scheduled semi-finals in St Patrick’s Day in Croke Park.

Following the completion of the provincial U20 championship, the 2020 EirGrid GAA U20 Players of the Provinces were announced with Dublin's Lorcan O'Dell, Tyrone’s Cormac Munroe, Galway’s Cathal Sweeney and Kerry’s Ruaidhrí Ó Beagloaich acknowledged as the stand-out players in their respective provincial championships.

In the Leinster decider the Dubs were slow to get going but a string of seven points in-a-row as the opening half developed put Tom Gray’s side on the road to victory.

The O'Moore County opened well with points from Ronan Coffey (two frees) and keeper Matthew Byron who drove over a massive free from 50 metres.

Dublin needed to respond and wing-back Lee Gannon provided the inspiration with a well struck point from 35 metres. The Whitehall Colmcille clubman followed up with a second point from play in the tenth minute to reduce the gap.

In between one of Dublin's key players on the night, Kieran McKeon, had a goal effort saved by keeper Matthew Byron from close range.

A minute later the Dubs were level when Ciarán Archer slotted over from play, the first of his seven points (0-3f, 0-2 '45'), following good direct play from full-forward Luke Swan.

Byron edged Laois back in front before Dublin took control to reel off seven points without reply.

Dublin improved significantly in the middle third, winning clean possession and breaking ball, and their forward line got a constant supply of possession.

The Laois defence found the dynamic Mark Lavin difficult to slow down and points flowed form Archer ('45'), Lavin, stylishly slicing over with the outside of his right boot, Seán Foran, Archer again (free following a foul on Swan), Loran O'Dell, following good work by Lavin and Swan, and two Archer frees to move 0-10 to 0-4 clear.

When attack-minded corner-back Alan Murphy's goal chance glanced off the Laois crossbar Dublin were in full flow and by the half-time break were 0-11 to 0-5 in front, with Archer closing out the scoring with his second successful '45'.

The O’Moore County enjoyed lots of second half possession but the Dublin defence gave nothing away cheaply as their work-rate, intensity and tackle count kept their opponents at arm’s length.

At a key moment Rory Dwyer broke forward for a crucial early point in the second half after Laois had wrestled back the upperhand while sub Conor Kinsella made an immediate impact on his introduction when scoring to make it 0-14 to 0-7 after 48 minutes.

Kieran McKeon kicked three brilliantly struck, clinical points inside the concluding ten minutes to ensure Dublin did not loosen their control of the game on the scoreboard.

In the provincial semi-final Dublin recorded a comprehensive victory over Meath (2-14 to 0-7) in Parnell Park.

The Dubs laid the platform for the victory in the opening half as they led 1-8 to 0-3 at the half-time interval having played with the elements.

Dublin's work-rate did not relent in the second period as they ran out comfortable 13-point victors.

The Royal County's quest was hindered by the injury to their senior footballer Shane Walsh, and in his absence their attack lacked a focal point.

Backed by the wind Dublin started well and were 1-4 to 0-0 ahead inside just eight minutes.

Meath failed to score from play in the opening half, all their three scores coming from placed balls, while the hard-working Mark Lavin chipped in with two fine points for Dublin towards the close of the opening half.

On the occasions Meath did threaten Dublin's defence stood strong with Rory Dwyer in particular putting in some telling interceptions and dispossessions.

Three minutes into the second half Lorcan O'Dell carved through the middle of the Meath defence before finishing to the net with poise to see his side move 2-8 to 0-3 in front. Then Evan Caulfield pointed off his left to extend Dublin's advantage.

At the three-quarter mark Ciarán Archer looked sure to score Dublin's third goal but was denied by Meath keeper Seán Brennan and they had his second attempt saved on the line.

Sub Pádraig Purcell came off the bench in the second period and kicked two points in a lively display as Tom Gray's side ran out comfortable winners. 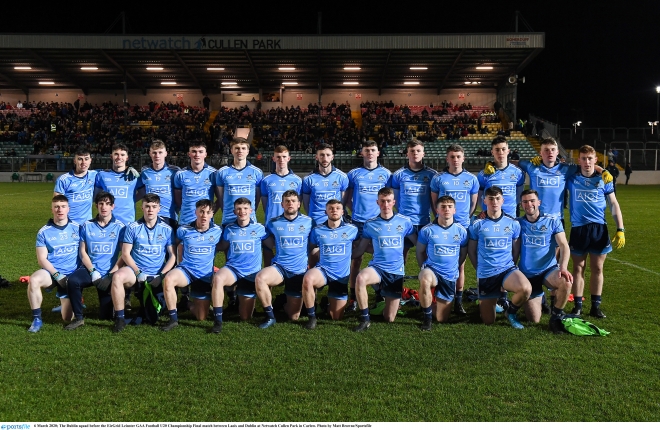 Archer was in the right place at the right time to fire to the net after Pádraig Purcell was twice denied by Longford keeper Eoin McGuinness. Five minutes later Kinsella made no mistake to crack home Dublin's third goal.

There was little between the sides throughout before Longford were reduced to 14 men following the sending off (yellow/black card) of Aidan McGuire.

Dublin led 1-8 to 0-7 at that stage and over the conclusion turned their numerical superiority to the advantage, following the 47th minute sending off of Longford's Aidan McGuire.

After the sides were on level terms (1-3 to 0-6) at the break Dublin restarted impressively with five points in-a-row.

Killian McGinnis, Kieran McKeon, Dublin's first half goal-scorer Lorcan O’Dell pointed off his left, Ciarán Archer (free) and sub Pádraig Purcell were all on target to propel the Dubs into a 1-8 to 0-6 lead.

After starting the half on top they also finished in style with those two goals as well as scores from Luke Murphy-Guinane and an Archer free to run out ten-point victors.

Dublin had opened their Leinster championship campaign with a 1-17 to 1-7 victory over Wicklow in Joule Park, Aughrim in early February.

Tom Gray's side laid the platform in the first half when they quickly recovered from conceding an early goal before concluding the half in dominant fashion to lead by three points at the break.

Dublin also finished the game on top as they scored the last six points despite suffering black cards to Pádraig Purcell and Ciarán Archer in the 54th and 55th minute respectively. Second half sub Pádraig Purcell had two points to his name before trooping off.

Dublin extended their half-time advantage with points from Ciarán Archer, Alan Murphy and Pádraig Purcell on the restart as Wicklow only managed two second half points, both from Matthew Ging.

Wicklow, backed by the strong wind, had made a dream start with an Eoin Darcy goal in the third minute but Dublin replied shortly after with Adam Fearon raising a green flag.

Points from Kevin Quinn, James Hedderman and Eoghan Byrne saw the hosts move three points clear but Dublin improved as the half progressed.

Points from Mark Lavin and Ciarán Archer cut the gap to one before Johnny Keogh responded for Wicklow.

An excellent Seán Foran point was followed by another by Ciarán Archer to bring the sides level, 1-4 each, by the 12th minute.

Eoin Darcy’s successful ‘45’ put Wicklow back in front before Dublin closed out the half with points from Ciarán Archer (free), Lorcan O’Dell, Luke Swan and Kieran McKeon to lead 1-8 to 1-5 at the interval.

Saturday's opponents won back-to-back Ulster U20FC when they put in a very impressive second half to defeat Donegal (1-11 to 0-9) in Clones with Darragh Canavan's goal the crucial score.

Canavan, son of the legendary Tyrone footballer Peter, missed the entire Tyrone SFC this year but has returned to full fitness in advance of Saturday's All-Ireland semi-final.

Despite playing with a strong wind in the opening half, Tyrone led by just a point at the break, but the holders produced controlled football after the restart, with Ethan Jordan making a massive contribution to their victory with five points from play.