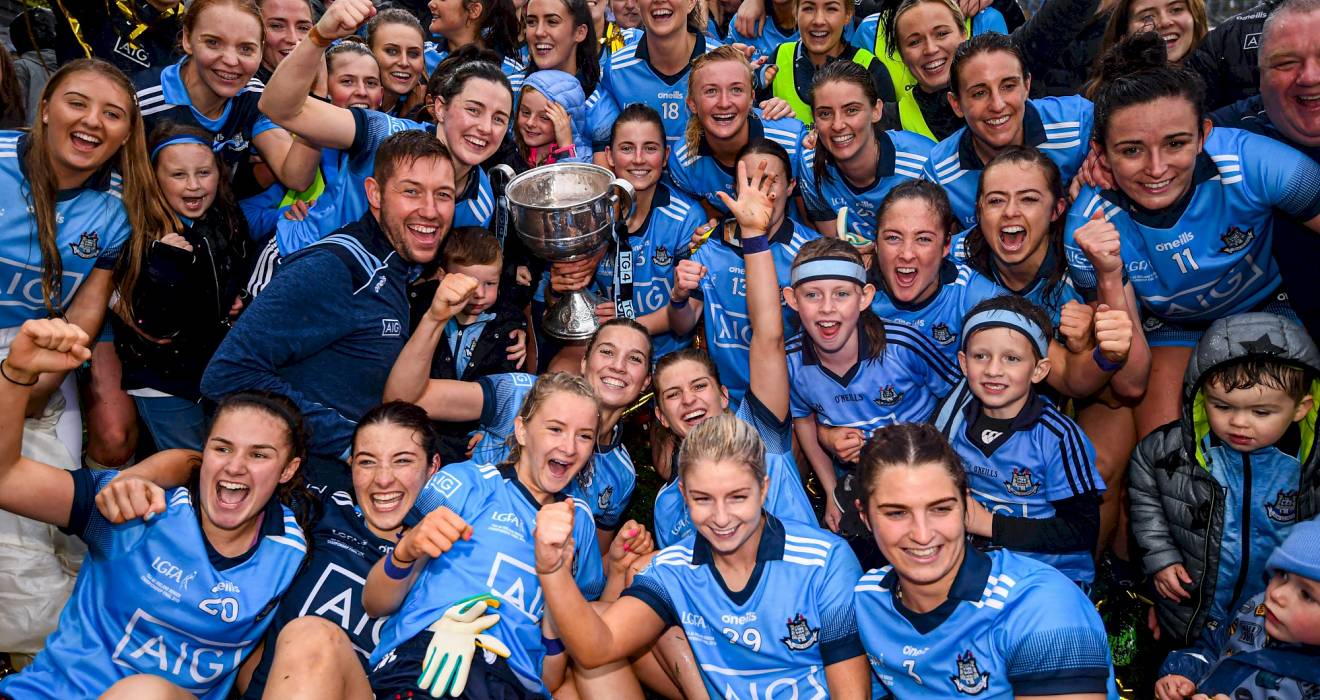 We showed our character: Mick Bohan

Dublin’s experience of the big occasion was key to their third TG4 All-Ireland Senior Championship Final win in-a-row when defeating Galway (2-3 to 0-4) on Sunday, according to their manager Mick Bohan.

There was a record 56,114 spectators in attendance at Croke Park – almost 6,000 more than last year’s previous biggest crowd – despite the wet and windy conditions, which meant less than ideal playing conditions for both sides.

The first score of the game didn’t arrive for 22 minutes, but it was a crucial goal for Sinéad Goldrick while Hannah O’Neill’s palmed effort nine minutes after the break kept Galway’s comeback at arm’s length.

This was Dublin’s sixth straight final appearance, and after three losses to start that run, they completed their hat-trick of wins in style. The experience of Goldrick, Lyndsey Davey and Siobhan McGrath was instrumental in the win, which pleased Bohan.

“Isn’t it some testament to the older group of our players. That was an absolute war out there today. And all the scraps, but if you look at the key scraps in that game they were won by the older players,” said Bohan.

“When you talk about developing people for the world, for so many different skillsets. I look around our camp at the moment and see those leaders. That is what they do. They do that in so many ways night after night.

“That is what we saw out there today. It wasn’t pretty but (they showed) character. Their character stood up a little bit higher than what Galway’s was. That is no disrespect to them at all. They need to learn their trade and you can only do it by getting here.

“That little bit of experience that comes year after year. You can imagine how proud we are going back into that dressing room.”

While this was far from the most entertaining All-Ireland final in memory, the conditions had a huge effect on the action. It was the lowest scoring final since 2003 and both sides struggled in front of goals, while retaining possession in contact was almost impossible with the slippy ball.

But the shooting was poor too. Róisín Leonard and Sinéad Aherne uncharacteristically missed frees early on, and it wasn’t until Goldrick’s deflected goal that the scoreboard was impacted eight minutes from the break.

It was certainly a day for defenders and Dublin were well represented by theirs. Olwen Carey was outstanding alongside Goldrick, while Éabha Rutledge negated the influence of Galway captain Tracey Leonard. Galway too performed admirably at the back, but the goals they conceded were vital.

It was a remarkable half-time scoreline of 1-0 to 0-1, but straight after the restart Dublin added to their tally when Davey found the target, while she also played a huge role in her side’s second goal when O’Neill flicked her accurate pass to the net.

Just before that score Galway were reduced to 14 players when Mairéad Seoighe was sin-binned for a late charge on Ciara Trant, but despite that Tracey Leonard and Róisín Leonard cut the deficit to three points with seven minutes remaining.

But there was no dream comeback for Galway, and a brilliant Aherne point was added to by substitute Noelle Healy four minutes from time, the fourth time in their history that Dublin finished the year as champions.

“There was no nerves today. It wasn't that we didn't perform,” said Galway manager Tim Rabbitt. “This is a developing team. We were very calm, we were well in the game for long periods. We just made too many turnovers at crucial periods and Dublin, being the team that they are, punished us.

“To only concede six scores in a match and especially against Dublin you'd expect to win a game but they are worthy All-Ireland champions and congrats to them on the three in-a-row.

“We're on a bit of a journey at the moment but this is only a stopping point on it. The girls have been absolutely brilliant all year and put in a super effort. We want to build on that now.”